Land transfer is when land title or ownership to land rights changes from one person to another. In Laos, foreigners may not own land, but the 2019 amendments to the 2013 Land Law now permits short term transfers of land use rights to foreign owners in certain circumstances, specifically for the purpose of developing condominiums and apartment buildings.1 Foreigners may also access land rights through leases and concessions.

State land leases and concessions in Laos allow both domestic and foreign investors to rent land from the Lao Government as well as private citizens at a yearly fee. Use of the land is limited to specific economic activities including, but not limited to, agricultural and tree plantations, mining, hydropower, infrastructure, manufacturing, and real estate.

Legally, leases and concessions are similar. However, concessions cannot be granted for less than five years while there is no minimum duration for leases.2 In practice, leases tend to be granted for smaller plots of land and for shorter durations of time than concessions. Leases also tend to be allocated for the use of already developed land (infrastructure, exploited resources, etc.) while concessions tend to be granted for land that is undeveloped.3 Larger maximum sizes apply for concessions on “degraded” or “barren” forestland. This has been a contentious issue, and is explicitly referenced in the Politburo Resolution on the Enhancement of Land Management and Development in the New Period of 2017.4

The government has tasked the Ministry of Natural Resources and Environment to centrally manage all types of lands by delegating the responsibilities to the ministries concerned for the management of respective land use categories.

The government has tasked the Ministry of Natural Resources and Environment to centrally manage all types of lands by delegating the responsibilities to the ministries concerned for the management of respective land use categories.5 , there is now a time limit on foreigners leasing land from citizens6 and the state.7

Land leases and concessions are an important component of the Lao government’s economic strategy. The 1992 Prime Ministerial Decree on Land was the first piece of legislation to allow foreign investment in land.8 However, land leases and concessions began to take off with the government promotion of the Turning Land into Capital (TLIC) policy (han din pen theun). Although not formalized or specified in a legal document, the TLIC promoted activities like leases and concessions that use land to generate economic value, development, and revenue, leading to the development of relevant laws and policies. Other TLIC-related activities included the development of land markets through land titling programs and the exchange of high-value government land for infrastructure built by private companies.

A National Land Policy was developed in 2012, but it was not implemented, and was finally abandoned in 2017. There was a gap until the arrival of the new Land Law in 2019.9

While land leases and concessions have been an important element of the Lao PDR’s rapid economic growth over the past decade, questions remain regarding the economic efficiency of the model. There have been reports showing that concession projects fail to produce crops efficiently or use the land that they have been allocated.10 The problem of concession operators leaving their land empty for long periods of time or not using all of the allocated land has, in particular, influenced the government to re-evaluate the TLIC policy.11 However, some of these issues have been addressed in the 2019 amendments to the Land Law.

While land concessions legally provide state land to investors for use, the land that is transferred is commonly already in use by local, rural communities.13 The loss of land often leads to a loss of food production, resources for consumption, and sources of income.14 Losing access to communal forests is particularly detrimental for rural women, who are often responsible for collecting forest products from such areas and thus have to search longer and harder to collect the same amount as before.15 Ethnic minority groups are often impacted heavily by concessions because they use and manage the upland swidden agriculture and forest landscapes that are most commonly targeted.16  Although villagers may be able to receive financial compensation for some of the lands lost, gain better access to road and electric infrastructure, and earn a cash income from working as wage laborers (especially for plantation projects), studies have shown that the potential economic benefits do not sufficiently compensate for the losses.17  Furthermore, while land titling may be available to some communities, the process is both hard for communities to participate in and incomplete. Environmentally, land concessions have led to deforestation through processes of forest conversion and the expansion of illegal logging networks, the chemical pollution of soils and waterways, and the drying and blockage of local water sources.1819

The complexity of the system of public concessions and leases combined with a poorly developed administrative system remains a concern. Unofficial concessions, projects with duplicate names, and projects that had failed to pay its deposit have been found. For instance, 13 of 112 projects in Phongsaly Province had duplicate names with a total area of 12,660 hectares. 11 projects in Attapeu Province did not have proper concession leases.20 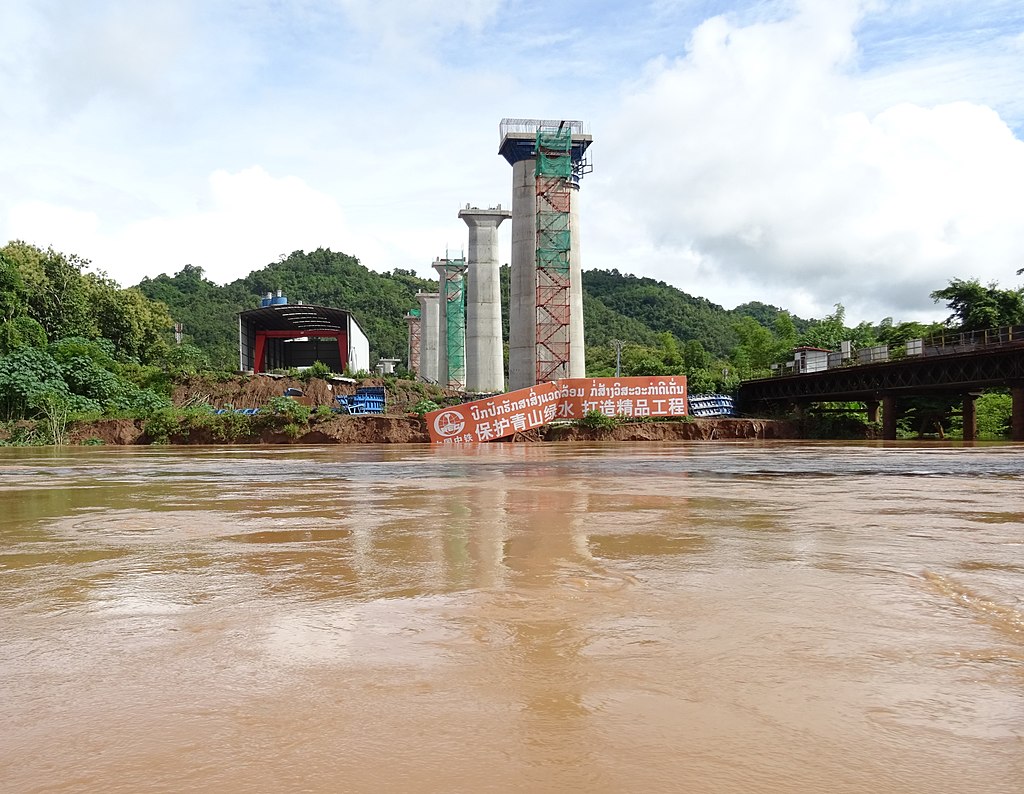 Bridge construction, a part of the Vientiane–Boten railway on the Mekong in Luang Prabang Province, Laos. Photo by Christophe95, Wikimedia commons, taken on 18 August 2018, licensed under CC-BY-SA 4.0.

As much as 1.1 million hectares, or 5 percent of Lao territory, has been leased or conceded to domestic or foreign investors – an area as large as the country’s total rice paddy land.21

Investors from three neighbouring – China, Vietnam, and Thailand – still hold the majority of investment in Laos, in terms of value, as of 2019.22 As of 2020, China is the largest foreign investor out of a total of 53 investors in Laos, undertaking a total of 813 projects worth USD 16 billion.23 239 Chinese companies have invested 590 million USD in agriculture and forestry, making them the country’s largest agricultural investors. Some agricultural projects are being considered specifically for the Chinese market, such as potential durian plantation projects covering 3,200 – 4,800 hectares of land in Vientiane capital.24

In order to avoid negative impact from agribusiness investments, and to include public participation processes regarding concession projects, Recommendations for consideration and approval of investment and land management mechanisms for lease and cultivation of agricultural crops were introduced in 2019, following with the Guide on responsible agricultural and forestry investment in Laos which has just been launched in 2021.

The Lao PDR government has made several announcements of moratoria on new concessions, but this has had only a limited impact on the pace of granting land to investors.25 In 2017, the government banned new banana plantations. The ban was reportedly lifted in 2018, as the government worked to issue chemical safety certifications in line with guidelines from the UN Food and Agriculture Organization. 26

Land granted for investment and development projects is also a key factor that has had an impact on changes to the land use rights of the local community, especially land allocated for large-scale land concessions, which could affect local households’ livelihoods and land use rights.27