A landlocked country of 7 million between the Mekong River and Annamite Cordillera, Laos has the lowest population density in Southeast Asia.1 Forest cover is estimated by the government at 40 percent, which the government aims  to increase to 70 percent by 2020.2 3 Some of the remaining area, considered as “damaged forest”, is sloping land used for cultivation. 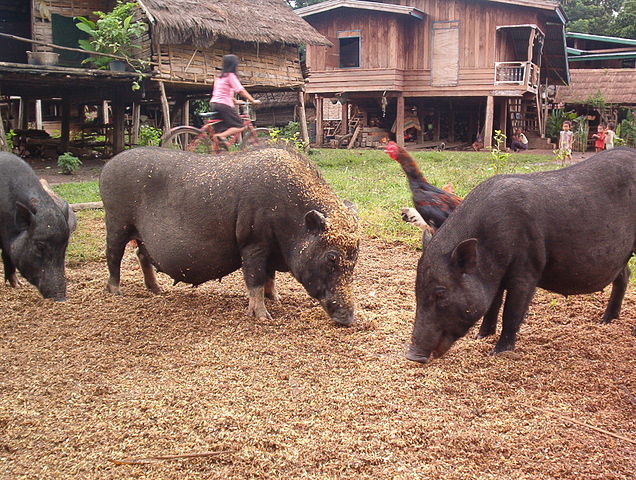 Most members of the 50 recognized ethnic groups in Laos have traditionally subsisted from cultivation, including shifting (swidden) agriculture and forest products. Patterns of land use have been transformed due to multiple historical processes. Firstly, the Indochina wars displaced populations, forcing them to abandon old areas of habitation and cultivation, and seek new ones. 4 Secondly, government policies to eradicate opium and swidden cultivation have reduced the use of land for those agricultural practices.5 Finally, tens of thousands of people have been relocated into new villages closer to roads and public services, shifting these forms of land use from upland to lowland areas in the process. 6

The government of Laos prioritizes economic growth and poverty alleviation through “sustainable development of the nation’s rich natural capital and land,” particularly through encouraging private investment and granting concessions of “state land” to investors, land that was not previously allocated to individuals or villages.7 8

Forest, land, water, and mineral resources together make up more than half of the country’s wealth.9 The national strategy to “turn land into capital” 10 has brought mining, hydropower, and agri-business land concessions to large areas of rural Laos, frequently turning small-scale farmers into landless laborers in the process. This represents an unprecedented transfer of land access from small-scale farmers to foreign investors.11

Laos’ political system is structurally similar to Vietnam’s, with the leading role of the Lao People’s Revolutionary Party guaranteed in the Constitution.12 Ownership of land is described in slightly different ways in various legal documents. The 2003 Land Law states that “Land of the Lao PDR is under the ownership of the national community as prescribed in Article 17 of the Constitution in which the State is charged with centralized and uniform management [of land] throughout the country and with the allocation [of land] to individuals, families and economic organisations for use, lease or concession”.13

The amended 2003 Constitution, however, states that “The State protects the property rights (such as the rights of possession, use, usufruct and disposition) and the inheritance rights of organisations and individuals” and that “Land is a national heritage”.14 In the Constitution, greater emphasis is placed on the protection of the property rights of organizations and individuals rather than the centralized management and allocation of land by the state.

The Ministry of Natural Resources and Environment (MONRE), established in 2011, is the main government authority with responsibility for land administration. The Natural Resources and Environmental Information Centre (NREIC), under MONRE, gathers data on land use including leases and concessions. MONRE’s roles are shared with the Ministry of Agriculture and Forestry, which manages agricultural and forest land,15 and the Ministry of Energy and Mines (MEM) in the case of hydropower and mining projects. The military has traditionally played a role in forestry and resource development.16 The National Assembly has recently assumed greater importance in monitoring land policy and channeling citizen feedback.17

In addition to the Constitution and Land Law, other legal documents governing land administration include the Forestry Law (2007), Law on Investment Promotion, Decree 192/PM on Compensation and Resettlement (2005), Decree 88/PM on Implementation of the Land Law, (2008), and Decree 135/PM on State Land Lease or Concession (2009). Policies on investment and concessions assign a leading role to the Ministry of Planning and Investment (MPI) for processing applications for commercial land concessions.18 A new National Land Policy was under discussion since 2013 and has been recently been taken up by the Politburo, which has issued a resolution on land.19 A revision of the Land Law is expected to be passed in 2019.20

Lao law gives the state a great deal of authority to allocate land to meet its objectives, but there are also important legal limits based on the property rights of individuals and villages as set out in the Land Law and Constitution. However, once land titles (bai taa din) are granted to individuals or organizations, they are permanent (freehold).21 Titles formally mark the boundaries of land, and the holders of land use rights may protect, use, lease and transfer these rights, as well as bequeath or otherwise pass these under inheritance law.22 However, land titles generally only seen in urban and peri-urban areas.23 By law, forest and agricultural land are initially allocated on a three-year basis by district or municipal authorities; if this initial period passes without incident, the land user can apply to the provincial authorities to issue titles for “long term use rights”.24

In practice, however, temporary land use certificates were mostly issued in the late 1990s and first half of the 2000s. 25 The 2011-15 national socio-economic development plan set a target of issuing one million land titles (out of 2.6 million total land plots); by mid-2015, 800,000 titles had been issued.26 27 The average time required to process and register a title is three months. The standard fee is 160,000 kip (about US$20), but MONRE officials admit that bribery and corruption are sometimes encountered in the titling process,28 as well as cases in which provincial and district authorities give overlapping titles for the same land.29

Customary tenure is not recognized in the Land Law, but is referred to in the Decree No. 88 (2008) implementing this law. It is also referred to in the Politburo Resolution on the Enhancement of Land Management and Development in the New Period of 201730, and is included in the Forest Law as one category of forest utilization.31 Communal land titling has only been piloted in three locations,32 33 with temporary status, and is not linked to indigenous status as in Cambodia.34 In practice, however, communal land use is practiced by all ethnic groups in Laos; one study found that in every community visited, “land held in common by a community or user group plays a crucial role”.35

While communities theoretically see at least limited rights for communal lands, lands that are used intensively, such as those used for rice paddy, are treated differently from lands that the government perceives are not used intensively. These rights to lands deemed by the state as “not actually used” can be taken back by the state according to a 2017 party resolution.36 This tension in regard to community land by the state is not new, and has been part of state policy since as early as the mid-1990s with the now closed Land and Forest Allocation program.37 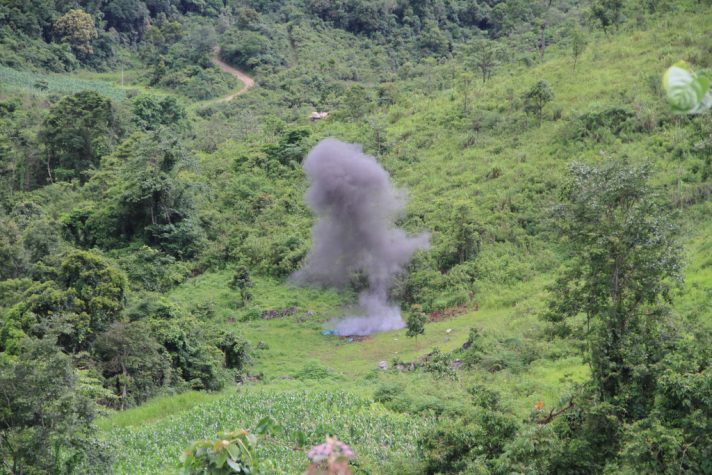 A controlled explosion of a UXO in Xieng Khouang province, helping to make the field safe for the farmer to expand their crops. Photo by Mines Advisory Group, Flickr, taken 29 June 2010. Licensed under CC BY-SA 2.0.

International donors have supported several phases of land titling, with funding from the Australian, German, and Swiss governments, as well as the World Bank. Donors have conducted an extensive set of policy studies and an inventory of land concessions.38 International support has also contributed to clearing unexploded ordnance (UXO) from the US-led “secret war,” which affects 25 percent of villages in Laos and constrains land use.39 This work continues with the localization of SDG 18, an extra Sustainable Development Goal to reduce the impact of UXOs.

The 2003 Land Law prohibits speculation on land and requires state approval to change land use from one category to another (e.g. from agricultural or forest land to industrial use).40 The state may requisition land for public purposes with “appropriate compensation”.41 42 These provisions have been broadly interpreted to allow land acquisition for private economic purposes. However, there are proposals under the latest draft of the Land Law to more clearly distinguish between land expropriation for public versus investment purposes, with the latter requiring consent from affected communities and compensation at market rates. Large areas of agricultural land have been lost as businesses acquire land from farmers, via purchases and concessions, to construct commercial buildings, with implications for national food security.43

As much as 1.1 million hectares, or 5 percent of Lao territory, has been leased or conceded to domestic or foreign investors – an area as large as total rice paddy land. Between 2010 and 2017, the ownership shifted from only seventeen percent of total concession area owned by domestic investors to twenty-nine percent in 2017.44 Fifty percent of the area of land conceded was for mining (exploitation) projects.45 The national inventory of concessions and leases completed in 2011 lists 2,640 cases, a fifty-fold increase since 2000. Leases are small (average size 3 hectares) and are mostly to domestic users, while concessions average 823 ha and are mostly for large-scale natural resource development projects over a 25-50 year period. 135 concessions are over 1,000 ha, and nine exceed 10,000 ha; these large and very large concessions comprise the majority of land under investment.46

State land can be granted at multiple levels of government and by different ministries,47 including MONRE, MAF, MPI, MEM, and the Ministry of Industry and Commerce. Concessions of over 10,000 ha require approval by the National Assembly.48 Larger maximum sizes apply for concessions on “degraded” or “barren” forestland. Most land concessions up to 150 ha can be approved at provincial level.49

Although concessions are supposed to be granted on land not allocated to individuals or villages, there are many examples of concessions given that overlap with villagers’ land.50 Cases have also been documented of concessions that were approved by levels of government without a legal mandate.51 This has been a contentious issue, and been explicitly referenced in Politburo Resolution on the Enhancement of Land Management and Development in the New Period of 2017.52

Investors from three countries neighboring Laos – China, Thailand, and Vietnam – hold an estimated 53 percent of all land under investment. As of 2012, Vietnamese investors reportedly controlled the largest area of land (over 307,000 ha), followed by Chinese and Thai.53 In terms of the number of projects and capital invested, China is the largest investor, with about 40 percent of the total.54 The Lao PDR government has made several announcements of moratoria on new concessions, with limited impact on the pace of granting land to investors.55 56 In mid-October 2015, the creation of new banana plantations was banned by authorities in three northern provinces due to concern over chemical use by Chinese-owned banana farms.57

The Land Law and related decrees assign responsibility for resolving administrative and civil land conflicts to government land authorities.58 If relevant authorities are unable to solve the problem, it may be appealed to the next higher level or, as a last resort, to the justice system.59 60 In an apparent contradiction, conflicts related to land concessions may only be handled by the state agencies that are parties to the concession contract.61 62

No data is available on the total number of land disputes. Documented cases include rubber concessions in southern Laos;63 contract farming in the north;64 coffee in Champassak and others on the website of the Land Issues Working Group (LIWG).65 In peri-urban areas around Vientiane, conflicts have arisen over compensation and resettlement from construction of the 450 Year Road and draining of the That Luang Marsh.66 67

Laos’s approximately 105 registered non-profit associations (NPAs) have not been heavily involved in land policy advocacy.68 Efforts by some international and domestic NGOs to raise land issues at the ninth Asia-Europe Forum in 2012 is thought by some to be associated with the unresolved disappearance of Lao civil society leader Sombath Somphone.69 The LIWG, based in Vientiane since 2007, works collaboratively as co-chair of the Land Sub-Sector Working Group under MONRE. LIWG includes more than 45 member organizations and 80 individual supporters.70