Social development addresses profound social problems, especially poverty, unemployment and social exclusion, and seeks to define poverty across a spectrum of social and structural barriers instead of simply by income levels.

The Human Development Index (HDI) measures the development of a country, on average, in terms of health, education, and income per capita, where a high value (up to 1) indicates more advancement in human development. Laos improved its HDI figure over the period 1990–2017, from 0.400 to 0.601. In 2017, Laos ranked 139th out of 188 countries for the HDI, but 109th out of 151 countries on the Inequality-adjusted Human Development Index (IHDI). IHDI is an adjusted HDI with the distribution among a country’s population (where 1= perfect equality). Laos has the lowest IHDI in Southeast Asia in 2017, with a score of 0.445, very close to Timor-Leste, at the 107th rank with a score of 0.452.3

Poverty rates in Lao PDR have declined from 33.5% to 23.2% between 2002/03 and 2012/13, lifting half a million people out of poverty.4 As a result, the country met the Millennium Development Goal (MDG) target of halving extreme poverty. Evidence of this development includes the number of people with electricity increasing by twofold (93%); the proportion of those without a toilet having halved (23.9%); and those with access to water supply increasing to 83.9%.5 Much of this can be attributed to the fact that poverty reduction has been a priority on the national agenda. The overall goal in the 8th National Socio-Economic Development Plan includes reducing poverty and graduating from Least Developed Country status.6

At the same time, however, the estimated gini coefficient of expenditure inequality (where 0 = complete equality and 1 = complete inequality) has risen from 0.311 in 1992/93 to 0.364 in 2012/13, meaning there is greater inequality nowadays. An increase in this statistic and a decline in absolute poverty indicate that while the poor are better off in real terms, the rich have benefited more in proportionate and absolute terms.7

Another issue is that many people escaping poverty still remain close to the poverty line – approximately half of the poor in 2013 were not poor in 2008. According to the World Bank, 90% of the population in 2013 lived on less than $2.50 per day and faced a 10% chance of falling back into poverty.8 This vulnerability is due to several factors such as agricultural changes and health shocks.

Particularly, vulnerability to climate-change hazards has increasingly impacted livelihoods of Lao people. Laos is very susceptible to natural disasters such as droughts, floods and landslides, which have caused a wide range of damages to agricultural products, homes, infrastructure, and irrigation systems, as well as outbreak of tropical diseases by and large. This results in negative impacts on health and food security, especially for the poor and vulnerable who live close to the national poverty line.9

The global hunger index reveals the state of malnourishment and nutrition in the country. From 1990 to 2015, the proportion of the population who were undernourished went from 42.8% to 18.5%. Currently, one fifth of Lao people are undernourished and 5% of young children eat only a minimum acceptable diet.14

Like many other issues, the rural-urban divide is tied to malnutrition: stunting and underweight prevalence is twice as high in rural areas without road access, as compared to urban areas.15 This points to a need for education on maternal nutrition, as Lao-specific cultural beliefs and food taboos are major determinants of malnutrition.

Major causes of death in Lao PDR are influenza and pneumonia (13%), coronary heart disease (11%), stroke (10%), and dengue (9%).16 Existing health services to treat patients and tend to illnesses are in poor state. At the national and regional levels, the number of critical health care workers is maldistributed and low (a little over half of WHO recommendations). Health centers are typically staffed with four health workers and nearly half of these workers never undergo in-service training. Overall, poor service readiness and compensation are the main reasons behind the low quality of health services in the country.17 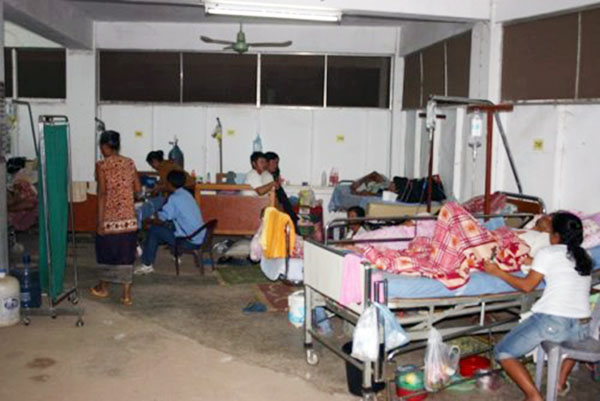 A hospital in Laos – evidence of understaffing and poor medical infrastructure. Source: http://jclao.com/journey-through-laos-where-are-all-the-doctors/

As of 2015, the literacy rate of the population over 15 years in Lao PDR was 84.7%, increasing from 72.7% in 2005. Meanwhile, there is still a large gender gap; the literacy rate was 79.4% for females, in contrast to 90% for males.18 Literacy disparities between males and females increase in rural areas and in ethnic groups.

By 2014, Lao PDR met the MDG target on enrollment, with primary education net enrollment ratio standing at 98.5%. However, drop-out rates remain high at the primary level, especially in remote and rural areas.19 Causes for dropping out are numerous, ranging from incomplete schools to poor quality of teaching and learning. While the number of students has increased at the primary and lower secondary levels, the quality and efficiency of learning programs require improvement.20 In 2014, one quarter of all grade 4 students could not read properly, and the survival rate to grade 5 stood at 81.1% in 2017.21

Differences in school net attendance increase when the education level progresses. Those in rural areas and ethnic groups (non-Lao-Tai groups) are more disadvantaged.22

Gender inequality is prevalent in Lao PDR, with women facing prejudice in many sectors. The share of women in waged employment is low in all sectors (35%). Women also occupy the lower rungs of the labor market and are generally excluded from formal sectors. 64% of female workers are in elementary occupations and 63% of those workers are classified as service, shop and market sales workers. On the other hand, men make up the large majority of civil servants, professionals, technicians and other advanced occupations.23 In the national parliament, Lao PDR has one of the highest proportions of women (around 27%), which is well above the world average. However, the proportions of women in other decision-making positions within the government is low, standing at 5% in 2012.24

In terms of related legal frameworks and administrative action, Lao PDR ratified CEDAW (the Convention on the Elimination of all Forms of Discrimination Against Women) in 1981, becoming the second country in the region to commit after the Philippines. In 2003, the National Commission for the Advancement of Women (NCAW), which acts as the country’s national women’s machinery, was established.25

There are two types of social protection schemes in Lao PDR. One is for civil servants, which has been managed by the State Authority for Social Security (SASS) since 2007. The other is for the formal private sector, run by the Social Security Organization (SSO) since 2000. Although the percentage of formal-sector workers who are covered under SSO is unknown, membership it is estimated at around 66,800 members and their descendants. The number is low because coverage was initially required for only companies with 10 employees and above, but was later extended to enterprises with even one employee. As of 2013, approximately 1,150 enterprises provided coverage for employees.26

Unfortunately, formal social insurance does not cover everything. For example, health coverage does not include some treatments, such as chemotherapy, heart surgery, and other chronic conditions. Funding limits are involved as well, with the current package of basic social protection in Lao PDR amounting to about $95 million per year. The universal health insurance component makes up $30 million of this sum, while maternity programs total $9 million.27

The child protection system in Lao PDR also faces challenges. Support for families and community services for child protection in risky and harmful situations are limited. The overall birth registration rate of children under five stands currently at 73%. The majority of mothers/caretakers do not know or understand the process to register births with civil authorities. Physical punishment of children under 14 by any violent methods are moderately high (69 %). Marriage at a young age (before 18) still occurs in both rural and urban areas (16.3% and 7.1% respectively).28

Disability is an integral part of social exclusion in Laos. This is magnified by the problem of unexploded ordnances (UXOs), which have led to higher disability rates in the country. According to WHO, 10% of people in Laos have a disability. Causes include birth defects, traffic accidents, infection, disease, and malnutrition. Disabled persons face numerous obstacles, like social stigma and lack of access to proper healthcare and education.29

Although the government has not developed specific programs or support mechanisms for the disabled, there are multiple legal frameworks that include guidelines dedicated to those with disabilities. Key ones are highlighted below:30

The NCDP is chaired by a representative from the Ministry of Labor and Social Welfare. Other ministries involved in reaching out to disabled persons include the Department of Veteran Affairs, Ministry of Public Health, and Ministry of Education. Organizations dedicated towards the cause include the Lao National Disabled Persons Association (LNDPA), Lao Disabled Women’s Development Centre (LDWDC), and Lao Association of the Blind. 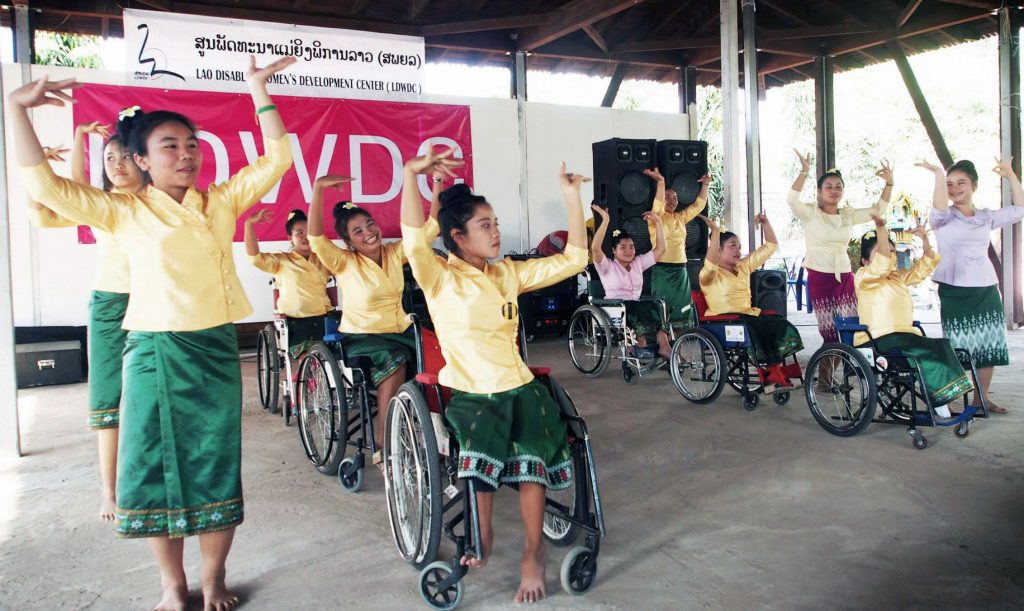 Lao PDR is the most ethnically diverse country in the Southeast Asia region. The government does not use the word “indigenous” or “ethnic minorities,” as it officially considers all citizens to belong to “ethnic groups”, including citizens belonging to the majority Lao-Tai ethnic group.31 There are four main ethno-linguistic groups consisting of 49 ethnic groups (EGs) and some 200 ethnic subgroups.32 Because of both the number and diversity of ethnic groups, they face numerous challenges, ranging from resource access to inequalities between urban and rural populations.