The Lao People’s Democratic Republic (Lao PDR), shortly known as Laos, is a small, least developed country in Southeast Asia, landlocked with Vietnam in the east, Thailand in the west, China in the north, Myanmar in the northwest, and Cambodia in the south, with total area of 236,800 km2 and about 7 million populations (2019). Laos is vulnerable to several types of disasters. Floods and landslides are prevalent, while droughts also occur in some years in different regions. Additionally, pests and disease are likely surging under the changing climate and environment.1

Floods commonly occur during the wet season from May to October, and more specifically during August and September when tropical storms, cyclones, and typhoons normally batter. Floods occur regularly in the lower floodplains along the Mekong river and its tributaries, mostly in the central and southern provinces. Meanwhile, other downstream areas throughout the country are also affected. Savannakhet, Khammuane, Champasak and Attapeu are the most likely affected provinces. In 2008, torrential rains caused flooding around the Mekong River, affecting 228,320 people and killing dozens with the estimated loss over US$4 million. In 2011, Laos was hit by a string of tropical storms affecting 12 of its 17 provinces. An estimated half a million people were affected by this flooding.2 Flooding in 2019 (as of 14 October), at least 765,000 people have been affected and 19 killed by Tropical Storm Podul and Tropical Depression Kajiki in Laos. As many as 97 bridges, 747 schools, 43 health centres and hospitals, 462 road places, 275,114 livestocks and poultry were affected by the floods. Total damage is estimated to cost US$164 million (1.45 trillion Kip).3 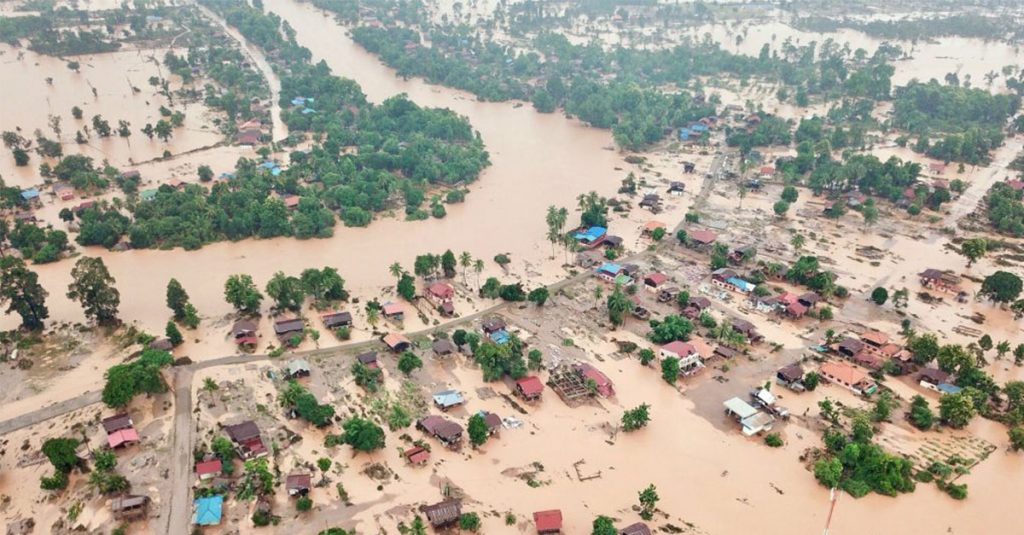 Flash floods occur during southwest monsoons, especially in northern and central parts and also some mountainous areas in the southern part of Laos. The effects are brief, localized and destructive. These events have tended to happen more frequently recently due to deforestation in mountainous areas.4 In July 2018, the collapse of saddle dam D at the Xe-Pian Xe-Namnoy hydropower project in southern Laos was caused by heavy rain from the Son-Tinh tropical storm and led to a massive flash flood, devastating thousands of farms, property and houses in Attapeu and Champasack provinces, and leading to 49 dead, 22 missing, and thousands homeless.5 In July 2019, a heavy rainstorm led to flash floods in eight villages of Nan district, Luang Prabang province; at least 372 families were affected with estimated damages of over 11 billion kip (approximately US$1.2 million).6 7 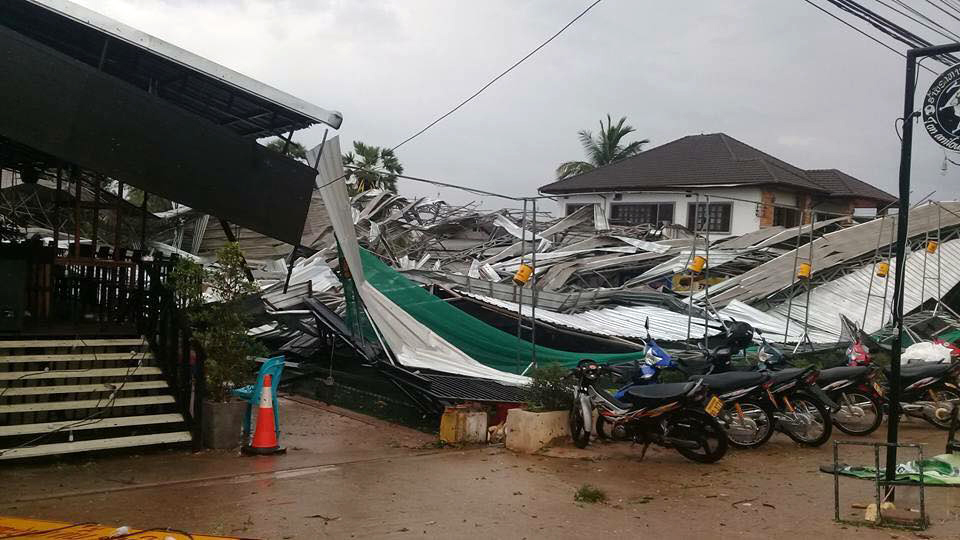 In Vientiane’s Hadxaifong district, several restaurants, factories and other buildings were left without roofs. Source: https://jclao.com/weekend-storms-batter-parts-laos/

A large volume of groundwater after prolonged days of high precipitation causes landslides and slope failures. Roughly 5% of the country in the central and southeastern parts are affected by landslides, due to topography and soil conditions. In some cases, landslides are related to riverbank erosion. Most landslides result in partial or complete impasses to segments of roads, leading to economic losses, delays to traffic, and restricted movement of transport, and further require debris removal, repairs to retaining walls, roadside drains, and the resurfacing of roads.9 A landslide in Houaphan province on August, 3rd 2019 swept two houses into a river near the Laos-Vietnam border, causing seven missing, and motorists were warned about landslides at northern mountainous routes between Kasy district (Vientiane) and Nan district (Luang Prabang).10 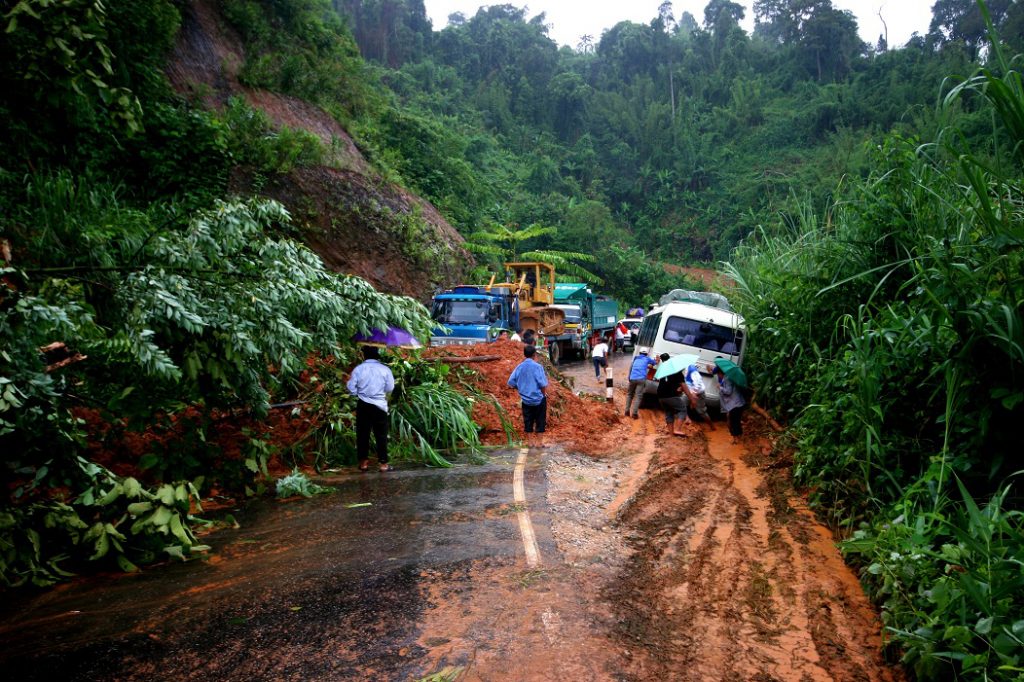 People pushing a bus at a landslide site in Laos. Source: http://www.drivenachodrive.com/2013/09/a-landslide-brought-it-down/

Laos is vulnerable to droughts, which can occur throughout the country. Most drought events occur in western Champasak, Salavan and Savannakhet, and in the northeastern part of the country in Xiengkhouang, Houaphan and Luang Prabang provinces. When precipitation is low (less than 2.0 mm), drought conditions are worsened, and highly sensitive areas will be adversely affected. Laos is deeply impacted by extended drought conditions. Droughts have devastating effects on economy, causing agricultural failures, impacting food security and access to clean water. Laos experienced two considerable droughts in 2003 and 2007. In 2003, extreme drought conditions in the northern and central regions resulted in US$ 16.5 million in damages.  The 2007 drought in the central region of Laos cost approximately US$ 1 million in damages.11 Recently in 2019, dryer climate conditions have also led to prolonged drought, with an alarmingly low water level on the main river, raising concerns to millions of lives relying on the ecosystems. In mid-2019, the Mekong river in Vientiane dropped to 0.7 meters below its average water level from 1961-2018, and rocks and sand underwater have been observed at many points. Nationwide, only 40 percent of rice fields have been transplanted due to the delay of rain.12 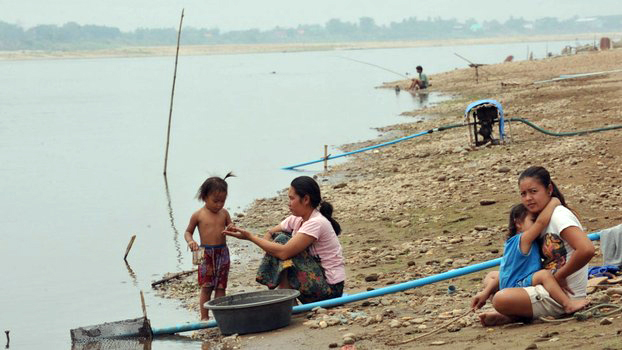 Women and children sit on the bank of the drought-hit Mekong River near the Lao capital Vientiane. Source: https://www.rfa.org/english/commentaries/mekong-threats-09132019155403.html

Outbreak of pest and diseases in crops, animals and humans has threatened agricultural production and livelihoods of the country as well as people’s health. Since 2014, Laos has experienced a continuing outbreak of locust swarms in the northern provinces affecting many thousand hectares of crops (corn, job’s tear, cassava, rice, etc.) every year.13 14 15 The infestation of fall armyworms (Spodoptera frugiperda) on sweetcorn in Xayaboury province in 2019 destroyed 30 percent of 35,000 hectares of maize, causing huge losses to the farmers.16 As of November 2019, Laos has seen 165 outbreaks of African Swine Fever (ASF) in all provinces/cities, killing over 39,000 pigs in total.17 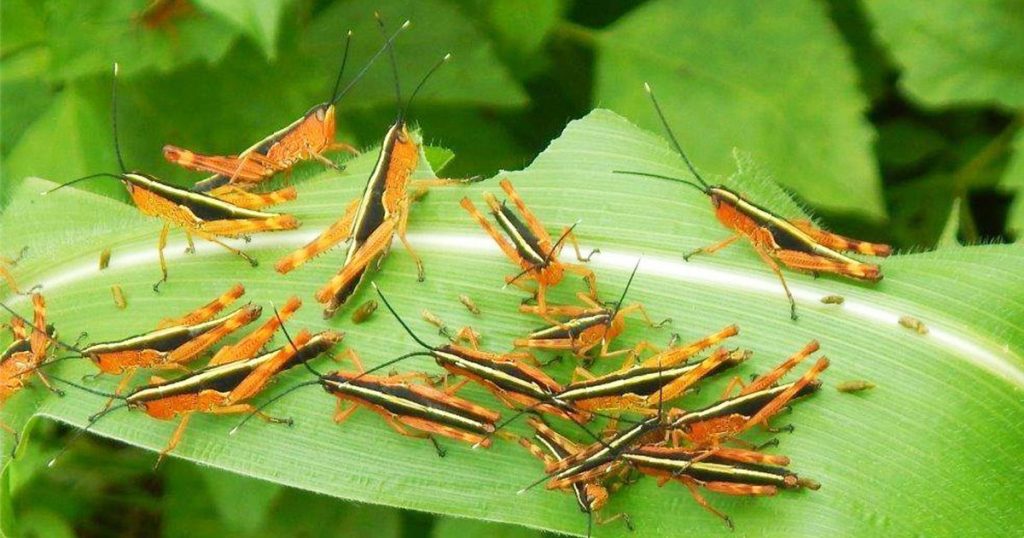 Dengue is an endemic in Laos, occurring throughout the country year-round. The outbreaks commonly rise during the wet season, from May to October.18 In 2013, Laos experienced the worst dengue epidemic, with 44,171 cases and 95 deaths reported.19 In 2017, there were 11,067 dengue cases and 14 deaths,20 while 6,446 cases and 19 deaths were recorded in 2018 21 As of July 2019, dengue claimed 37 lives, with at least 16,690 cases in the country.22 Other than dengue fever, the most common diseases in Laos include influenza, heart disease, and diarrhea, most of which are due to poor sanitation and inefficient accessible healthcare.23

Unexploded ordinances (UXOs) are also considered one of the hazards threatening the livelihoods of people and food security in Laos. UXO accidents, though decreasing, still happen every year, with death and injuries. This hazard will not be detailed here; more information on UXO in Laos is available here.24

Laos is also at risk of earthquakes; over 30% of the country is located in a moderate earthquake hazard zone, though there is no record of relevant devastating disasters in the past.25 In 2015, Laos experienced a 5.0 magnitude earthquake, shaking the area between Borikhamxay and Xiengkhuang provinces; however, no damages were reported.26 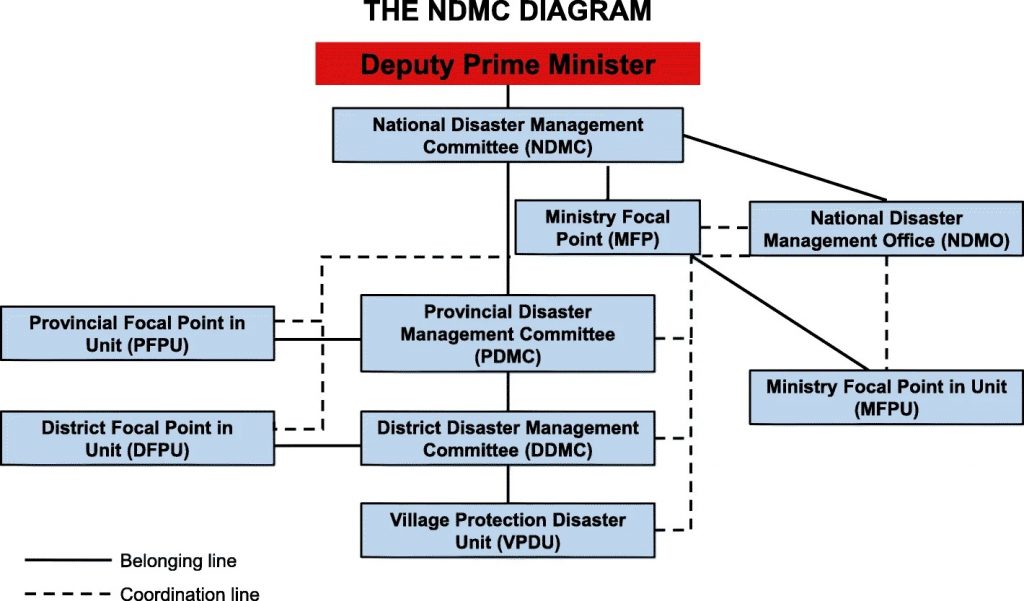 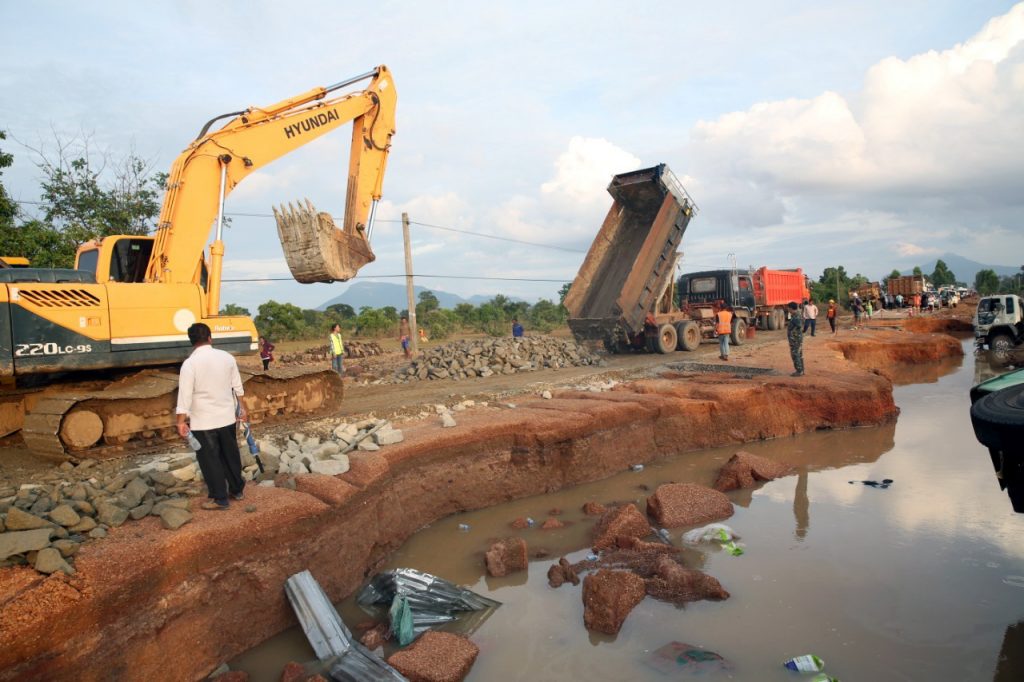 In terms of emergency response, the system was in early stages of development when the country was severely hit by the extensive flooding in 2008. In response to the incident, a multi-agency mechanism was formed in early August and started performing response operations and coordination, resulting in an effective response in Vientiane.33

To build back better, Post-Disaster Needs Assessments (PDNA) have been regularly conducted to identify most urgent needs and development priorities, jointly with other stakeholders. Also, methodologies to estimate sectoral damage and losses, as well as corresponding needs, have been developed and adapted to local requirements for Lao PDR since 2012. This involved developing standard operating procedures for PDNA, designing templates for sectoral data collection, forming provincial PDNA teams and providing capacity building.34