Land use in Laos has recently undergone significant change. While most members of the 50 recognized ethnic groups in Laos making up the Laos population have traditionally had a subsistence lifestyle, collected forest products, and cared for land through shifting (swidden) agriculture, government policies have reduced the use of land for those agricultural practices.1 In addition, the Indochina wars forced people to abandon old homes and seek new ones.2  Finally, relocations have shifted tens of thousands of people living upland into new lowland villages closer to roads and public services.3 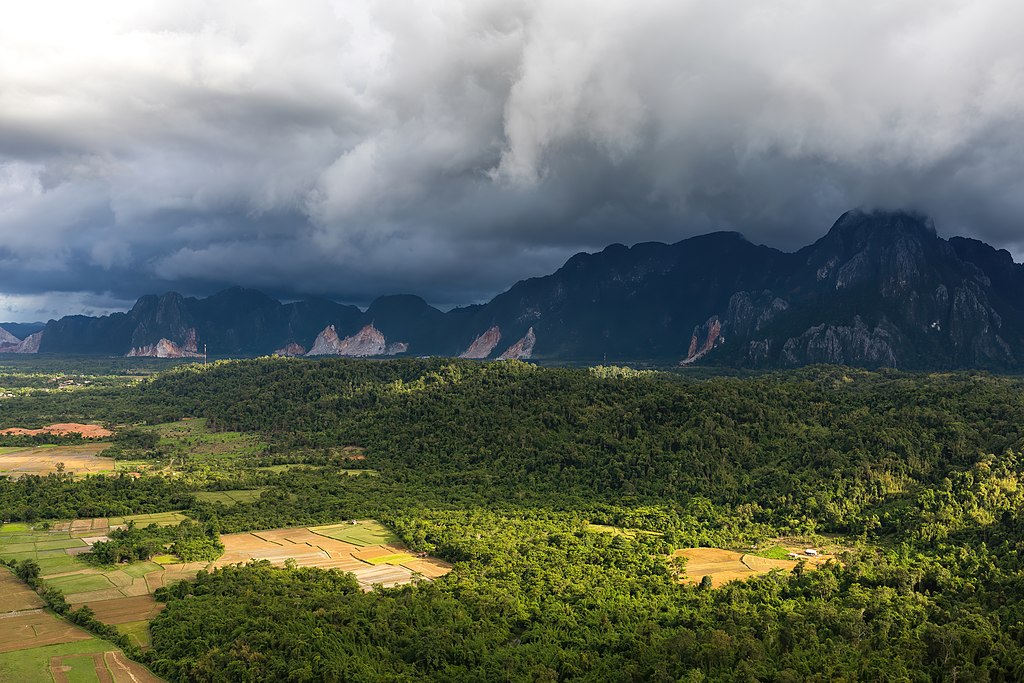 Sunlight and stormy sky over the mountains and paddy fields in Vang Vieng, Laos. Photo by Basile Morin, Wikimedia commons, taken on 19 June 2020, licensed under CC-BY-SA 4.0.

Lao PDR’s biodiversity has been significantly reduced, including through population growth, land-use change, resource extraction, and the transition to a market economy.4  Based on the national strategy to “turn land into capital”5, the government of Laos prioritizes economic growth through encouraging private investment and granting concessions of unallocated “state land” to investors.6 7 Yet, this does not mean that the land was unoccupied or untenured. Concessions, granted to mining, hydropower, and agri-business companies, frequently result in taking land access away from small-holder farmers. 8 This process continues with the 2019 amendment of the Land Law, which clarifies that foreigners can now hold time-limited leases and concessions of land.9 This relatively new focus on legally-recognized, individual land rights has impacted many local and ethnic communities, whose traditional and communal claims are unrecognized by law. 10 The result is land-related tensions, conflict, and insecurity.11

Under the Constitution of Laos, land and natural resources are considered “national heritage”. 12  The state is responsible for managing it in accordance with the law. 13  It is also the responsibility of the state to protect the property rights of organizations and individuals.14

The Laos government regulates land and property rights under the Land Law. Originally promulgated in 2003, the Land Law was amended in 2019. It focuses on the management and allocation of land by the state in a “centralized and uniform manner”.15  The 2019 amendments to the Land Law added clarity and detail. It now categorises different types of land use purposes, including for “Conservation” (including protected areas that are governed by the state authorities), and “Development” (for agricultural and industrial zones).16 There are also prohibitions against certain activities (article 159) by land users, but there are no specific penalties.17

Other documents relevant to land include:

The Ministry of Natural Resources and Environment (MONRE) is the main government authority responsible for land administration. Each sector manages their respective land use categories.18  ​​The Ministry of Planning and Investment (MPI) processes applications for commercial land concessions.19 The military has also traditionally played a role in forestry and resource development.20 The National Assembly has recently assumed greater importance in monitoring land policy and channeling citizen feedback.21

Land dispute resolution in Laos is largely based on the following laws:

The 2019 Land law expands on land dispute settlement mechanisms in Part XII. It states that administrative disputes can arise due to the use of land without authorization, using land not in line with its purpose, failure to use land, failure to pay taxes or fees, and land boundary disputes, among other things.23 The District Office of Natural Resources and Environment is the first level of authority tasked with addressing the issue.24 The next level is the Provincial Department,25  then the People’s Court.26 Disputes can be resolved by compromise or mediation; arbitration; lodging a complaint to the court; or international settlement.27

Disputes have arisen in part because the legal framework does not fully match the complexity of tenure in Laos. For instance, existing laws do not recognize shifting cultivation practices, and so the lands in rural mountainous regions that are cared for using these practices cannot be formally registered. Nor is the communal holding of land recognized. In addition, social instability, population growth, and a lack of knowledge about the legal system of land rights adds to conflict. Gender barriers are also present, and are discussed in more detail in the next section.

However, conflicts continue, as parties fail to recognize customary land rights – including those formally registered29– and expansion of farming into forests has increased. However, village mediation committees are unable to enforce decisions. Therefore, some experimental data collection tools have been recently introduced at the household level. These are the Social Tenure Domain Model(STDM), Collective Agriculture Land Management (CALM), Participatory Forest and Agriculture Land Use Planning, Allocation and Management (PFALUPAM), and Forest Management Framework.

Villagers impacted by concession projects have stated that they have been impacted by the loss of land for farming, rising conflicts over land, and loss of access to non-timber forest products (NTFPs), timber and wild animals.30 Conflicts were also noted in relation to agricultural projects and tree plantations,31 compensation and resettlement from construction of railways3233 and new development zones.34 However, no data is available on the total number of land disputes.

Civil society is active on land issues. The Land Information Working Group (LIWG) is a working group of civil society organizations, based in Vientiane since 2007. The LIWG works collaboratively as co-chair of the Land Sub-Sector Working Group under MONRE. LIWG includes more than 45 member organizations and 80 individual supporters.35

Women, especially those from ethnic groups, face many challenges regarding land-related decision-making. The law is patrilineal, which does not allow women to hold ownership rights. Particularly for women in matrilineal villages, this means their access and ability to manage land is declining. It is also decreasing due to policies encouraging transfer of land to investors. This has in turn caused a decrease in forest area, agricultural land, food security which, combined with the changes toward market-based agriculture and higher productivity, has destabilized the relationship of women with their land. There are concerns that these changes will negatively impact women’s access to land rights, especially in villages that are traditionally matrilineal.36 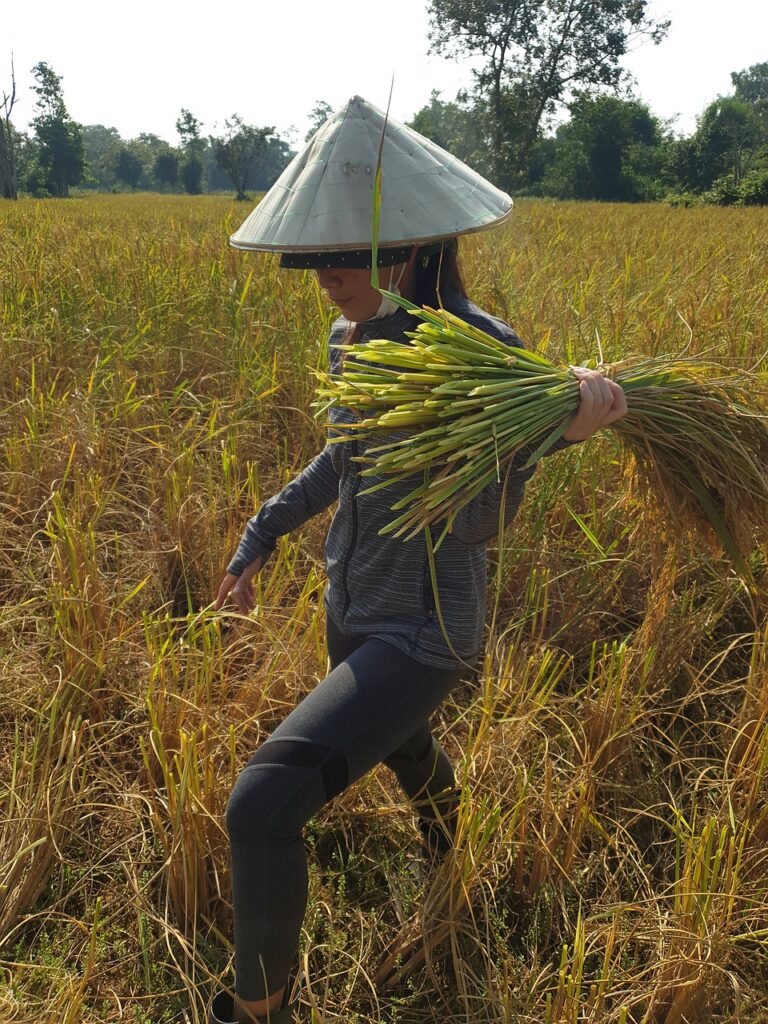 Consequently, the voices of women, and their land use needs, are not taken into account. Further, women are particularly vulnerable to discrimination due to gender-biased cultural practices and beliefs. The issue is intensified for women in poor households and ethnic minority communities.37

The amended Land Law does not take into account women’s land rights. In fact, it no longer recognizes co-ownership between husband and wife, meaning that women have no claim in the case of divorce or the death of her husband.38  It has been suggested that the land tenure system could be undermined by village relocation, appropriation of collective land, individual land titling of communal-owned systems, lack of formal recognition of communal lands, and policies encouraging transfer of land to investors.39