Inadequate infrastructure is often referred to as a major constraint on the socio-economic development of Laos. Thus, it has been a major goal of the Lao government to upgrade infrastructure in line with meeting the UN Sustainable Development Goals (SDGs), particularly SDG 9. This goal is associated with developing built assets that facilitate functional industries, enterprises, and society such as roads, railways, airports, communication systems, electricity and water and sanitation infrastructure. In general, capacity constraints limit the provision of infrastructure services outside of major cities in Laos.1

However, upgrading infrastructure is part of a strategy to exit Least Developed Country status by 2020,2 which was first conceptualized at the 6th Party Congress in 1996.3

The Lao government is particularly interested in transforming an apparent disadvantage of being a landlocked country into an advantage by becoming a land-linked nation. This would see Laos as a point of connection among neighboring countries, bridging the more advanced economies of China, Thailand, and Vietnam. 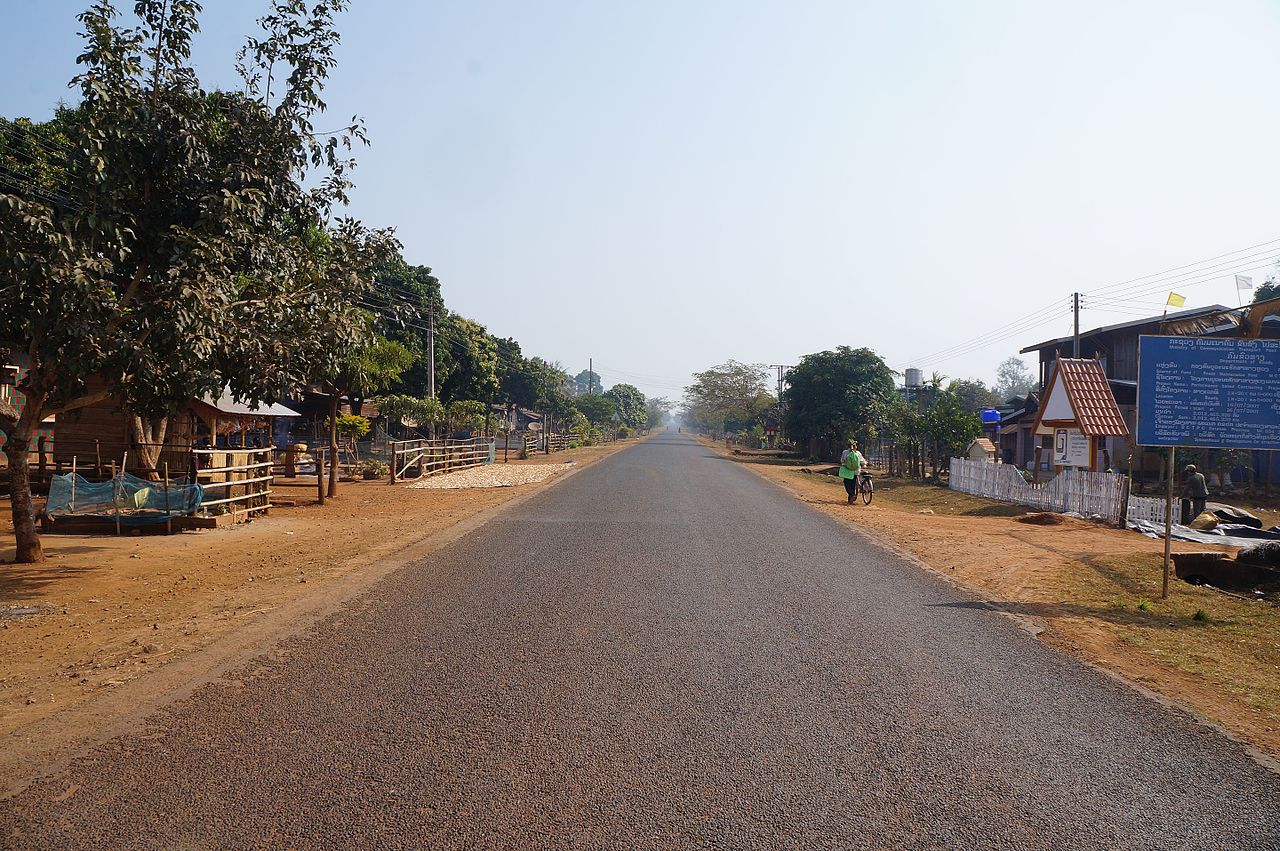 Road connectivity is a key element of the Lao government’s plan as well as the Asian Development Bank’s vision of a road-linked Greater Mekong Subregion. The country strongly depends on road transport for internal and external trade. For example, roads account for more than 98% of passenger-kilometers traveled and 86% of weight-kilometers for freight movement4. Improving accessibility to all-season roads is a key indicator of SDG Target 9.1.

Recently, significant advances have been realized: the road network has been extended from just 14,000 km in 1990 to over 44,000 km in 2012. However, only 17% of these roads were paved as of 2012, while 35 percent were gravel and 48 percent were earthen.5 Many sections of the road network are currently impassable during the wet season and some sections in such poor condition that they cannot be repaired and must be completely rehabilitated.

Funding is a major challenge for road development. While direct government funding can be used for smaller roads, larger projects require external funding or alternative financing arrangements. Many projects are funded by foreign donors. For example, the upgrade of Route 3 in northwestern Laos, which connects China with Thailand across Luang Namtha and Bokeo provinces, was funded jointly by the Asian Development Bank and the Chinese and Thai governments. Additionally, the upgrade of Route 9 in the south of Laos, which connects Thailand and Vietnam, across Savannakhet province, was funded by the Japanese government. In 2017, the World Bank pledged $25 million to Laos for strengthening road maintenance and improving road connectivity.6

The government has also been developing an alternative land-based financing model, first employed through the development of the 450 Year Road project, linking the Lao-Thai border Friendship Bridge with a route that runs to the north and south. Fifty meters of land on each side of this road will be expropriated and sold to the private sector to raise funds.7 On the same route, the Ministry of Public Works and Transport is considering public-private partnerships, with policy support from the World Bank to attract private sector investment in toll roads to help achieve longer term road infrastructure goals.8

Despite the many socio-economic advantages of road expansion in Laos, criticism has also been aimed at some of the negative environmental impact of these projects. Large-scale economic land concessions linked to roads have been used as legal loopholes to justify logging outside of national quotas and production forest zones. 9 In other cases, road projects have required the expropriation of land from communities without adequate compensation, such as in the case of the 450 Year Road project.10

The only rail infrastructure currently in use in Laos is a 3.5 km extension from Thailand, running from Nongkhai across the Friendship Bridge to Thanaleng Railway Station, 20 km east of Vientiane. The route was funded by the Thai government and is typically used for tourism and freight, rather than for local passengers. Plans to extend the railway by 9 km to reach the outskirts of Vientiane have yet to be realized.11

However, there are plans to develop two extensive rail lines, linking Vientiane with China via the Boten border in Luang Namtha province; and Thailand and Vietnam across Savannakhet province in southern Laos. The second line is known as the Savan-Lao Bao railway project, named after the border checkpoints it will link.

The Laos-China railway project has been under consideration for over a decade as a component of the Kunming-Singapore or Pan-Asian railway concept and more broadly, China’s One Belt, One Road Initiative.12 This planned railway network would connect Kunming and Singapore via various routes, passing through Myanmar, Laos, Vietnam, Cambodia, and Thailand. The Laos-China project is a joint investment of the Lao and Chinese governments. The Chinese government will invest 70% of the $6 billion required, with the Lao government contributing the remaining 30%.13

The Savan-Lao Bao railway is privately funded project by a Malaysian company (Giant Rail Company Limited), with the Lao government retaining a 10% share.14 Although the project was approved in 2012, as of October 2016, the project had only reached the preliminary stage of installing corridor posts along the route.

Construction of the Laos-China railway began in December 2016, with the boring of tunnels and construction of bridges at various points along the route.15 The project is controversial because of a substantial loan from the Chinese government used to fund the project and questions about whether the project will result in development that distributes benefits equitably and meet the needs of ordinary people. The International Monetary Fund has suggested the project would put Laos’ external debt sustainability at risk,16 as the loan is more than half of the country’s annual GDP ($12.37 billion in 2015).17 Additionally, most of the construction work will be managed by Chinese companies with Chinese labor.18 There are many unanswered questions about the social and environmental impacts of the project due to a lack of transparent information.19 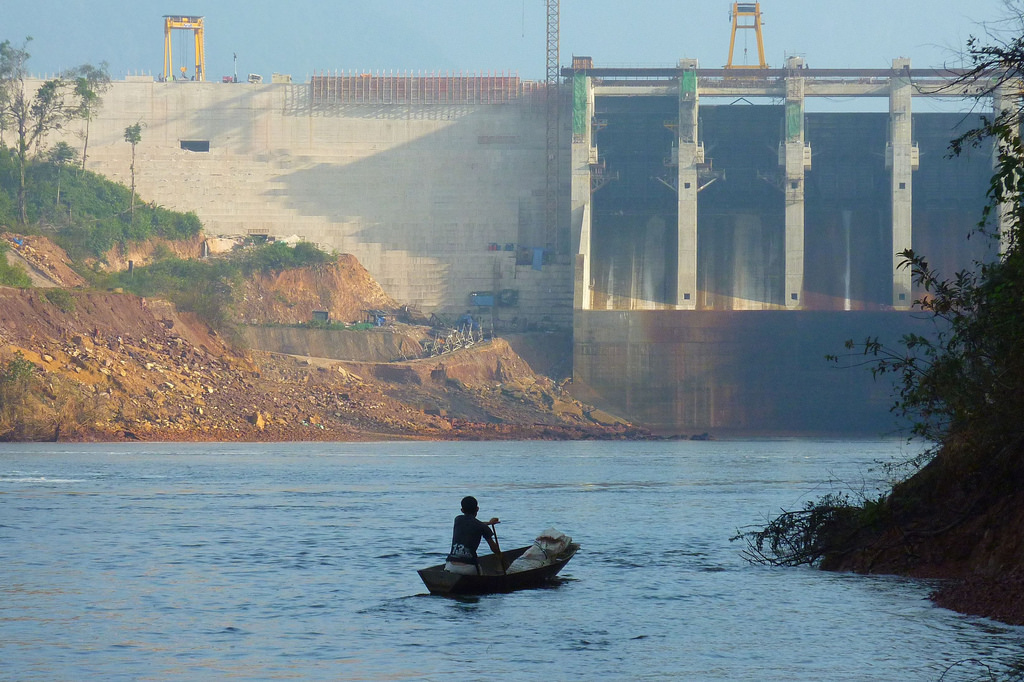 Nam Gnouang Dam, with a generation capacity of 60MW, on a tributary of the Nam Theun River in Laos. Photo by Eric Baran, via WorldFish, Flickr, taken on January 23, 2013. Licensed under CC BY-NC-ND 2.0

Laos’ electricity grid has expanded rapidly in recent years, through the development of a number of significant hydropower dams. In 2015, the Lao government stated that at least 70 projects were planned or underway, with a total generation potential of 26,000 MW.20 Much of the energy produced is planned to be exported internationally, with a focus on the Thai market.21 For instance, Laos generated 3,200 MW of hydropower in 2014, two thirds of which was exported to Thailand. At this time, there was a further 6,000 MW of generating potential under construction, including the 1,285 MW Xayaburi dam on the main channel of the Mekong.22 Consequently, the proportion of the Lao population with access to electricity grew from 15% in the mid-1990s to almost 90% in 2014, which places Laos well on track to meeting SDG 7; ensuring access to energy. Demand for electricity has grown by an average 13% per year.23

Laos has more water resources per capita than any other Asian country, but much of these are unsafe and may be contaminated by harmful chemicals and human waste.29 There is need for a greater focus on integrated water management is needed when for hydropower expansion plans.30 Additionally, water quality and safety issues related to the agricultural, industrial, and mining sectors, as well as addressing poor hygiene and sanitation all key challenges for meeting SDG 6. Consequently measuring what ‘safely managed services’ are needs new localized indicators.31 As of 2014, 72% of the population had access to an improved water supply source, compared to 45 percent in 2000.32

Improvements in sanitation coverage have also been realized in Laos. As of 2014, 64% of the population had access to an improved sanitation facility, up from 28% in 2000.33 However, less than half of the country’s 9,000 primary schools have both a functional water supply and sanitation facilities.34 Diarrhea is responsible for one-third of all under nutrition cases and 10% of deaths among Lao children under five. Due to a lack of proper facilities and knowledge of sanitation and hygiene practices, over a third of Lao people practice open defecation and only 19% of children’s feces are disposed of safely.35 However, the practice of open defecation has decreased by 37% since 1995.36 Furthermore, there is a strong urban-rural divide for sanitation access in Laos, where 87% of households in urban areas have access to improved sanitation, compared with only 48% in rural areas.37