Sustainable Development Goal 18 (SDG 18) – ‘Lives safe from Unexploded Ordnance (UXO)’ aims to remove the UXO obstacle to human development in Lao PDR (Laos).1 SDG 18 was uniquely developed by Laos to address the more than 80 million cluster submunitions that remain unexploded throughout the country from the Second Indochina War.2 Cambodia also adopted an 18th SDG to address its own UXO crisis – Cambodia Mine/Explosive Remnants of War (ERWs) Free.’3 No existing SDGs address conflict or post-conflict issues, with SDG 11 — Sustainable cities and communities — and SDG 16 –Peace, justice, and strong institutions — being the most applicable to the UXO crisis.4

The United States dropped 270 million cluster munitions on Laos between 1964 and 1973, up to 30 percent of which did not dentonate. Source: https://www.irishtimes.com/news/world/asia-pacific/death-from-below-in-the-world-s-most-bombed-country-1.3078351

From the Millennium Development Goals to SDG 18

The Sustainable Development Goals (SDGs) were created in 2015 to succeed the Millennium Development Goals (MDGs) with the goal of being achieved by 2015. Laos adopted its own MDG 9 – Reduced impact of UXO – in 2010. The targets of MDG 9 were very similar to the goals adopted for SDG 18 and achieved varying degrees of success.6 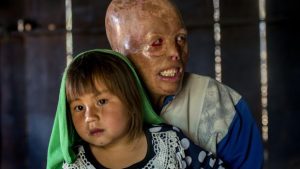 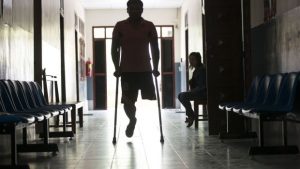 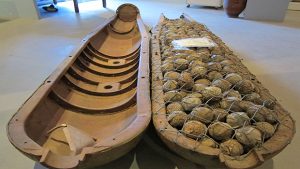 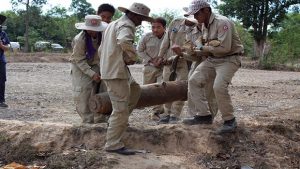 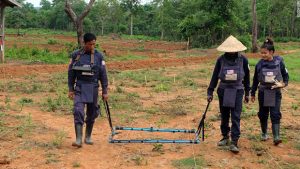 The second target of MDG 9 was to reduce substantially the number of annual casualties as a result of UXO accidents. The target was less than 75 deaths a year by 2015. This target was met in 2012 when the number of casualties was 56, and it has been below 75 every year since.9

The final target of MDG 9 was to ensure medical rehabilitation needs of all UXO survivors are met in line with treaty obligations under the UN Convention on Cluster Munitions, to which Laos is party since 2009, such as developing a national plan and budget and including victims in discussions. The national victim assistance strategy has been drafted in 2011 and adopted in 2014 by the national regulatory authority for UXO/mine action sector in Lao PDR.10 However, this target was not met by 2015; from 1964-2008, only 583 out of 20,493 injuries who require a prosthesis received the assistance due to budget constraints.11

SDG 18 was developed with the same general targets as MDG 9. However, the targets for SDG 18 are more ambitious. The primary change between MDG 9 and SDG 18 is the goal to build the Lao government’s capacity to fund UXO activities on its own, which was not a goal of MDG 8. This target has been incorporated into the 8th National Socio-Economic Development Plan (NSEDP) because needs are currently beyond national budgeting capacity. The 8th NSEDP also includes a target for nine provinces and 5,238 villages to complete a UXO survey, for the number of casualties to be reduced to less than 40 per year, and to provide assistance to 1,500 victims of UXO incidents, all by 2020.12

The integration of UXO activities into the NSEDP is anticipated to bring a better framework for clearance, reporting, and education to the UXO/Mine Action Sector, which includes the National Regulatory Authority (NRA) for UXO/Mine Action Sector in Lao PDR.13 The NRA is responsible for direction and policy formation, quality management, and building the capacity of the UXO Sector.14 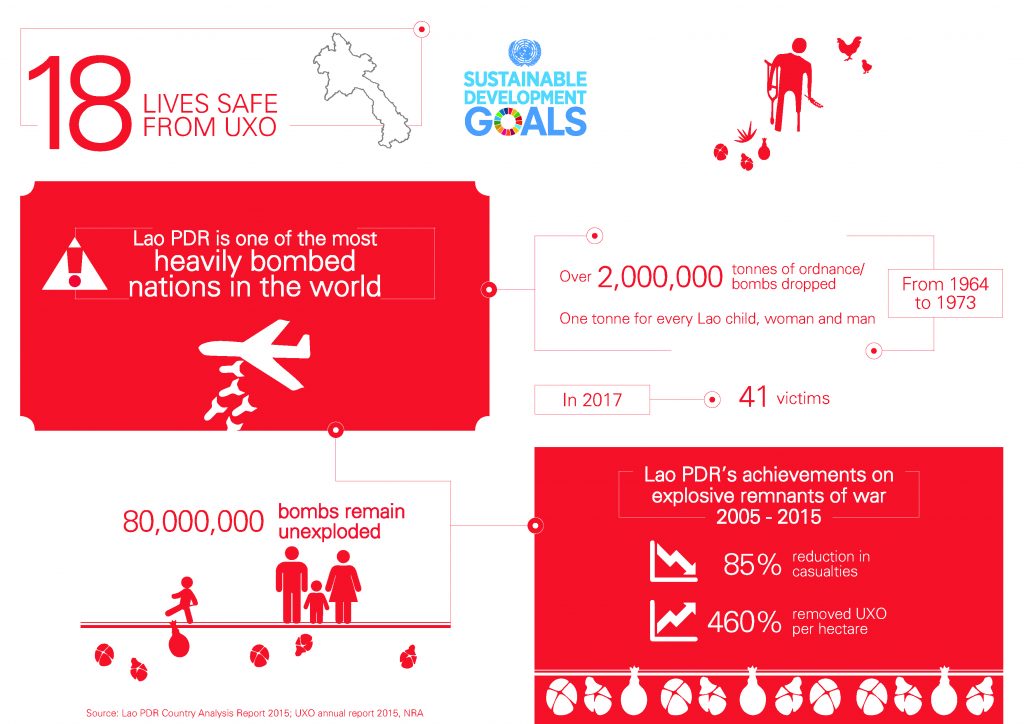 Implementation of SDG 18 in Laos

The UXO/Mine Action Sector was moved under the Ministry of Labour and Social Welfare in 2016. Placing the UXO Sector under labour and social welfare links it to other development agendas, especially disability care.15 The UXO Sector’s NRA has been augmented with training support in grants management, finance, and on-the-job management and strategy, and it has developed a policy for prioritizing clearance tasks. NRA activities include:16

In 2016, the NRA developed a new three-step Survey and Clearance Process:17

Laos is also a State Party to the Convention on Cluster Munitions. As such, Laos has obligations to clear all UXO by August 2020. However, due to the lack of funding and the massive amount of contamination, Laos will have to request an extension, which can be given for up to four years.18 The Convention also has a five-year roadmap which establishes a list of priorities for states and implementation actors. Included in this plan are risk reduction education, land clearance, and victim assistance.19

The largest hindrance to clearance efforts is funding. The amount of land able to be cleared depends heavily on funding from external donors. In 2015, the Lao government contributed 13% of the funding to the UXO Sector, but only 3% in 2017.20 21 In 2016, former American President Obama made a commitment of $90 million USD to fund UXO removal, with the money reportedly having been distributed across 2017, 2018, and 2019.22 In 2017, the US has provided $45 million USD contribution to fund a cluster munitions survey that will identify remaining priority areas and inform UXO clearance and risk management.23

The UN developed eight indicators, two for each target, to measure progress of SDG 18 in Laos. These include reporting the number of annual casualties, tracking clearance, registering the needs of victims, and evaluating the percentage of internal funding compared to external funding.24 Laos reports to the UN on these indicators annually as a party to the Convention on Cluster Munitions. Each member is required to submit a yearly evaluation of its efforts to meet the requirements of the Convention. All past reports can be accessed through the UN Office in Geneva.

Lao PDR has adapted Information Management System for Mine Action (IMSMA) to track the operational implementation and reporting of UXO sector, which might link to data systems in other sectors and enable wider monitoring, especially of targets 18.2 and 18.3.25 Strengthening data collection efforts and ongoing follow-up on UXO casualties will be necessary to monitoring achievement of SDG 18’s targets.

The SDG 18’s  targets have varying degrees of achievability. The first target – zero casualties – is very practical. The number of incidents has decreased by more than 85% since 2008, reaching a low of 41 in 2017.26 Furthermore, in 2016 alone, 450,000 people received mine risk education. This education took place in 620 villages and schools and included 73,500 children.27 Increasing the number of people who receive mine risk education will further decrease the likelihood of accidents.

The second target – clear all UXO from high priority areas and villages defined as ‘poor’ – is unlikely to be achieved. From 1996 to 2014, UXO Lao had cleared about 26,639 ha of severely contaminated land, only 0.28% of the total contaminated land.28 In 2017, a total of 3,852 ha of land were cleared, and 22,873 ha of land were newly identified as confirmed hazardous areas (CHA).29 This clearance rate is not on track to complete clearance by 2030.

The third target – Meet the health and livelihoods needs of all identified UXO survivors – is making some progress, but still underfunded. The NRA has set up six pillars of victim assistance, including data collection, medical care, physical rehabilitation, psycho-social rehabilitation, vocational training, and advocacy.30 As of 2018, victim assistance unit has completed the assessment for UXO victim needs, covering approximately 9,000 survivors out of estimated 12,000 survivors who are still alive, in 10 out of 18 provinces throughout the country. They have provided vocational training on livestocking for 107 victims in 3 provinces, given medical treatment for 601 victims after accidents, and medical rehabilitation for 3,368 survivors. Also, the UXO hotline “1603” has been up for victim supports and accident reports.31

The final target – ensure remaining UXO activities can be funded by the government – is dependent upon to what extent other goals are achieved by external donors by 2030. However, given the massive financial burden of UXO clearance, and the minimal amounts the Lao government has contributed to the UXO sector in the past, it is unlikely that the government will be in a position to fully fund continued clearance and assistance in 2030.32

Laos has developed “A Safe Path Forward II”, which is a national strategic plan aimed at reducing the impact of UXO. The goals of the plan align with those of SDG 18 and focus on a community-based approach to UXO clearance.33 Laos is making progress toward achieving SDG 18, but the deciding factor for its success is obtaining the necessary funding and developing the internal capacity to fund the UXO Sector without external support.