Sustainable Development Goal 5 (SDG5) focuses on gender equality and women’s  empowerment, breaking down this topic into nine goals with 14 associated targets. These targets cover discrimination in workplaces and homes, property rights, education and a broad range of other topics related to gender. Goals 5.1–5.3 focus on protection from violence and discrimination, Goals 5.4–5.6 and 5.A–5.B focus empowerment and economic access, and goal 5.C looks to encourage an overarching legal framework.1 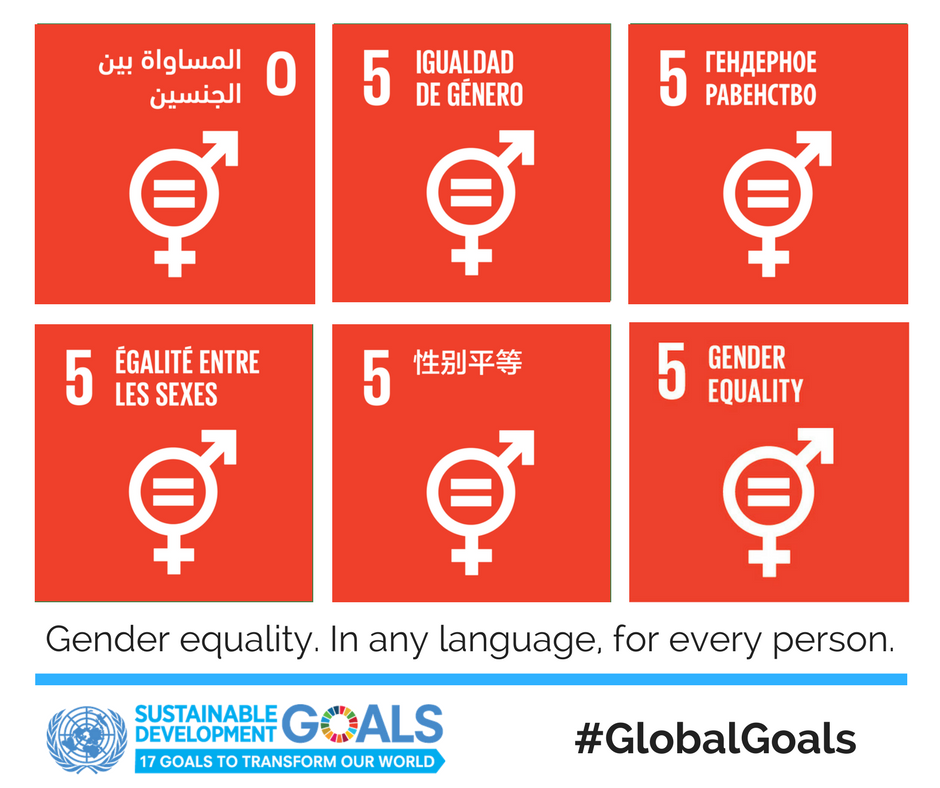 From the Millennium Development Goals to the SDGs

The Sustainable Development Goals (SDGs) emerged in large part as a successor and expansion of the Millennium Development Goals (MDGs). The MDGs were a set of eight goals designed to serve as a guide for policy and measuring stick for development, focusing on areas such as poverty, disease and gender inequality. Each area had specific targets, and all were designed to be achieved by 2015. In 2013, as the MDG timeframe drew to a close, the UN created the SDGs to guide a new phase in international development cooperation.2

Because the SDGs emerged from the MDGs, it is important to see how the MDGs serve as context for current work on the SDGs. Keeping this in mind, the most relevant goal is MDG 3: Promote Gender Equality and Empower Women. MDG 3 provided one target, focusing on eliminating gender disparities in education and empowering women to pursue careers afterwards. To this end, it provided three indicators. These focused on the ratio of boys to girls in the education system (3.1), the share of women in wage positions outside of agriculture (3.2) and the proportion of seats in the national parliament held by women (3.3).3

There is clear carryover here, as all three of these indicators were kept in as part of the SDG monitoring framework.4

Under the MDG regime, the Lao PDR saw marked improvements. Between 2009 and 2013, education became more equitable, with the ratio of girls to boys in primary and lower and upper secondary education rising.5 The MDG period also saw the proportion of women in the legislative government rise to more than a quarter.6

Perhaps most significant, however, was the creation of a legal framework that protected the rights of women. Equal protection is a part of the current Lao constitution, but is vague and does not address any specific issues.7 In 2004, however, the Lao government passed the Law on the Development and Protection of Women. This was followed by a presidential decree to promulgate the law.

The law addressed specific issues, ranging from equal property rights to access to education and economic opportunity to sexual violence to reproductive health and rights.8 This provided a framework that enshrined a more detailed and comprehensive version of equal protection into Lao law, and served as the basis for many programs, such as the development of the National Commission for the Advancement of Women and Mother-Child.9

While the MDG regime saw significant strides, there is still a need for institutional commitment to addressing gender-related issues, represented in SDG 5. As mentioned earlier, there is now a strong legal framework for addressing gender inequality. Enforcement, however, is still lacking. Educational gaps still exist, and are exacerbated at higher levels of education. This is especially true for women in ethnic groups, who make up the majority of the poorest quintile of Lao society.10

Perhaps more jarringly, the majority of women and almost half of all men in Laos believe violence is justified if a woman does not adhere to traditional gender norms and roles.13 This indicates that problems are both in enforcement and problematic normative issues, which cannot be fixed in the short-term and require longer-term commitment to education and women’s empowerment. This to say, SDG 5 programs will be key in addressing women’s issues in Laos.

Localization of SDG 5 in Laos

For the Lao PDR, the SDG 5 targets were broken down into four groups. The first reads, “discrimination reduced and equal opportunities achieved for girls’ and women’s empowerment” and encompasses goals 5.1, 5.5, 5.6, 5.a, 5.b, and 5.c. The second reads, “violence against all women and girls eliminated in public and private spheres” – reflecting goal 5.2. The third, “early marriages and adolescent pregnancies prevented”, represents goal 5.3. The fourth and final group, “unpaid care and domestic work recognized and valued” reflects goal 5.4.14

Further, Laos is a signatory to the Convention on the Elimination of All Forms of Discrimination Against Women (CEDAW).15 CEDAW is a UN treaty that serves as a statement of rights for women. Signatory countries, like the Lao PDR, commit to several pillars of eliminating discrimination. The first addresses the abolishment of any discriminatory laws and the adoption of laws prohibiting discrimination. The second requires the establishment of tribunals ensuring equal protection. The third mandates the prosecution of any person, organization or enterprise that discriminate against women.16 These pillars help to reinforce and expand upon the role of SDG 5 in Laos.

The localization of the planning and implementation of SDG 5 has been done in large part through the National Socio-economic Development Plan (NSEDP), which is released every five years. The SDGs were included first on the most recent NSEDP, which covers 2016 to 2020. The plan addresses to a limited extent how to include these goals in policy, and encourages the creation of a monitoring and evaluation (M&E) framework for the SDGs.17 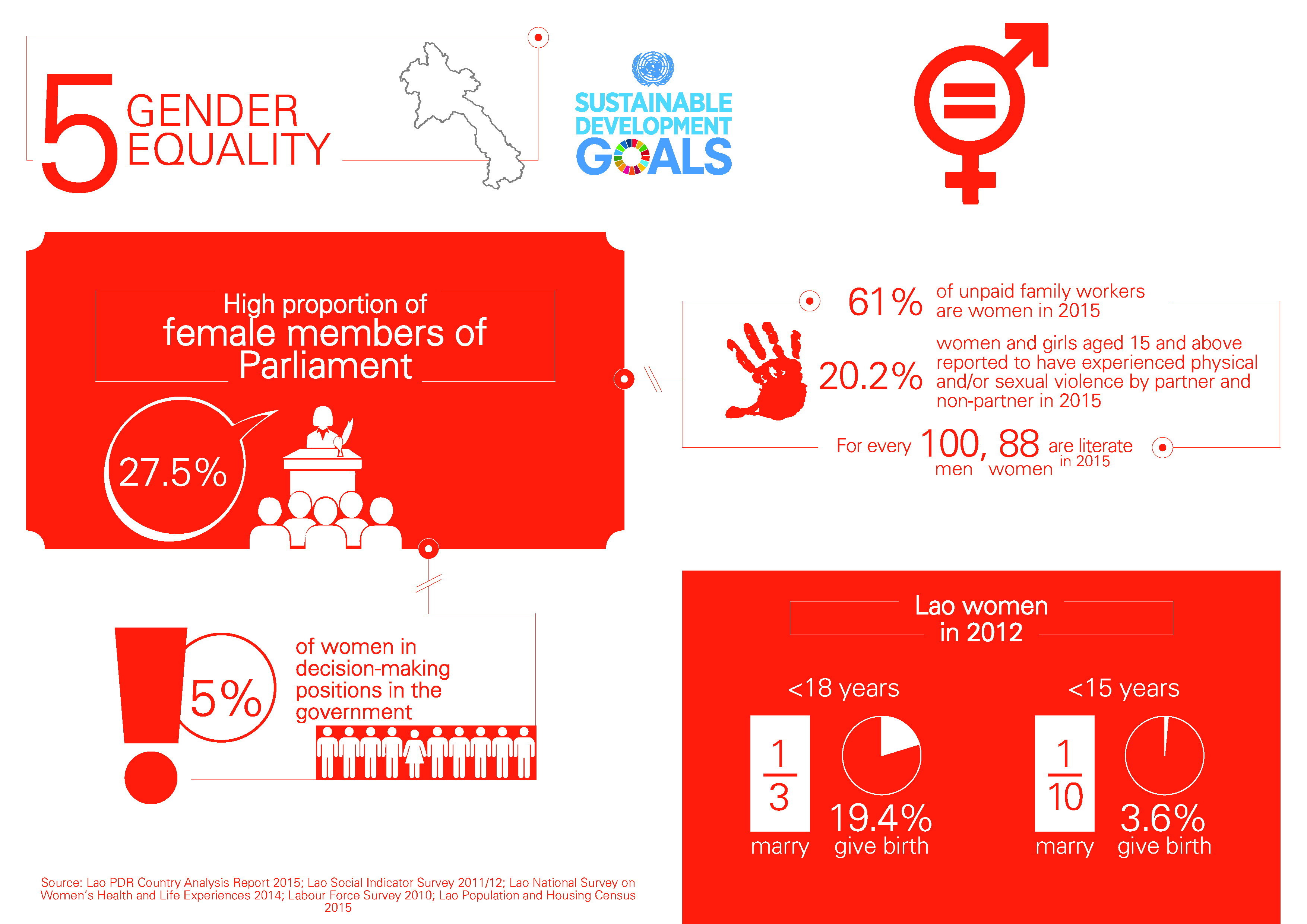 Implementation of SDG 5 in Laos

The majority of planning and accounting for SDG 5 is handled through the NSEDP, as mentioned earlier. The most recent NSEDP, which covers 2016-2020, breaks down efforts into a series of areas. The first is the mainstreaming of gender issues into department planning, and providing for women’s empowerment programs and village-level training on rights and issues.18

In conjunction with various CSOs and CEDAW, the government has carried out training sessions for officials on how to incorporate gender issues and encourage equality in policy.19 Further, the National Commission for the Advancement of Women and Mother-Child (NCAWMC) was created to develop a gender-reporting framework. The NCAWMC issued a report on the limited funding and institutional obstacles to monitoring gender issues, representing an important step towards accountability on gender issues.20

The second major area of focus for Laos is increased cooperation with international nonprofit organisations and state groups that work on gender issues.21 One example is the recent Stand Up Speak Out program, carried out by the Australian Embassy. The program enlisted male public figures in Laos to speak out against misogyny and dangerous stereotypes about women’s roles and rights.22 Programs like this will be critical in addressing the issue that many of the challenges facing Lao women are cultural and normative, rather than legal.

The third and final major area addressed in the NSEDP on gender issues is the strengthening of the Lao Women’s Union (LWU), in order to give voice to women in the country and provide a channel for advocacy and cooperation.23

The first, 5.5.1, measures the proportion of seats held by women in national parliament. The second, 5.5.2, is the proportion of women in decision-making roles in political, economic or public service positions. The third is the proportion by sex of mobile phone ownership, intended as a proxy for measuring equality of access to information. These three metrics are all collected regularly as part of the national census.24