With mostly mountainous topography and tropical climate, Laos enjoys an endowment of forest. Laos has one of the pristine monsoon forests in South East Asia. The estimation of forest cover in Laos has been a controversial issue over recent years, due the lack of official and internationally-recognized definition of forest. Because of this, estimated forest cover in Laos has been varied, dependent on the definitions and methodologies for analysis.1 According to the latest official forest classification, which defines forest as an area with minimum 20% canopy density, 10 cm stand diameter at breast height (DBH) and 0.5 hectares of area, the total forest area of Laos is estimated about 13.2 million hectares, or 57.4% of total land area in 2015.2 Mixed deciduous forest is the most dominant, accounting for about 9.4 million hectares. Other types of forest include dry dipterocarp, dry evergreen, coniferous and mixed coniferous and broadleaved forests. Besides these, there are potential forests of regenerating vegetation, industrial tree plantation and bamboo (27.30% of total area).

Forest resources are important to many stakeholders and contribute significantly to the rural economy in Laos. They provide tremendous environmental values through the provision of ecosystem services, including the protection of biodiversity and watersheds, as well as the sequestration of carbon dioxide.

However, the forests of Laos are currently under threat from multiple pressures, and while the proportion of land area covered by forests has increased, the quality of the forest has continued to rapidly degrade over the past few decades.3 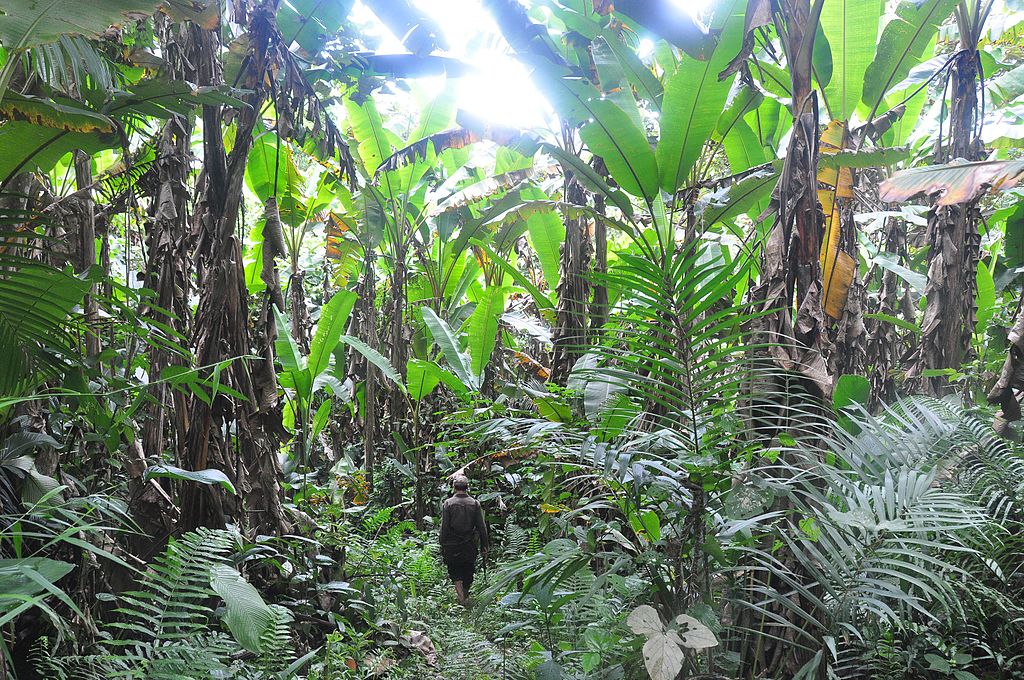 Lao forests have played a critical role in the country’s economic development since it was freed from decades of war and the Lao People’s Democratic Republic was founded in 1975. For example:

Forests in Laos host a great variety of plant and animal species. Studies of local flora list over 5,000 species in 1,373 genera and 188 families12, including 485 species of wild orchids.13 It is estimated that flowering plants number as large as 8,000-11,000 species in the country as a whole. Additionally, there are roughly 100 species of large mammals, 200 species of reptiles and amphibians, 700 species of birds, 90 species of bats and 500 species of fish.14

In upland areas, secondary forest areas, which may have been degraded by the collection of high value timber species, have also been shown to have diverse use values for the Lao farmers who use them to plant crops in shifting cultivation cycles. These cycles have been framed as environmentally degrading. However, once established, these systems have been shown to provide sustainable benefits with appropriate management systems, such rotational cropping. They also enable forest resources to be used for collecting important subsistence and commercial non-timber forest products. They also offer some minor diversity and CO2 sequestration benefits over other uses of secondary forests, such as rubber plantations, although are often placed in the same policy category.15 16

Lao forests are an invaluable national and global resource, providing habitats for animal and plant biodiversity and sequestering carbon dioxide to mitigate climate change. Forests also have important non-economic environmental and cultural uses. Forests are important to the spiritual beliefs of many rural Lao communities and indigenous people. Many villages preserve spirit forests as areas where spirits are believed to reside, as well as cemetery forests, where ancestors are buried. In rural areas, forests also contribute to the comfort and aesthetics of a village.17

Despite the values associated with the sustainable management and preservation of Lao forests, in recent history, their high economic value has placed them under significant pressure, which has led to both deforestation and forest degradation over time.

Based on measurements by the Lao government, deforestation has denuded large areas of Laos since the 1940s, when the national forest cover was over 70% of the country’s land area. In the 1990s, that number shrank to less than 40%.18 This deforestation was caused by many factors, however the primary drivers included illegal logging, agricultural encroachment, industrial tree plantations, hydropower dams, mines, and the development of other infrastructure, such as roads.19

Over the past decade, Laos has committed its efforts to increasing total forest area. From 2010 to 2015, Laos’ forest cover has seen an approximate increase by 1% annually. Despite this, there has been a steady decrease in the number of primary forest, along with the quality of forest ecosystems as a whole. Dense forest with a canopy cover of over 70% decreased from 29.1% to 8.3% of total forest area, while open forest (<40% canopy cover) increased from 16.3% to 28.9%.20

A differentiation may be made between the acute effects of deforestation (e.g, where commercial logging is the primary cause) and forest degradation where the quality and density of forested areas declines slowly over time and provides diverse benefits (e.g for swidden cultivation). For example, when high value timber is harvested from forested areas, the quality of the forest dramatically declines. However, shifting cultivation largely takes place in secondary forests, which have been managed sustainably in a rotation from agricultural production to secondary or regrowth forests for an extended period, and it causes deforestation only when it encroaches onto primary forests.21

Up to 73% of rural citizens rely on small-scale agriculture and forestry for their livelihood. In some communities, up to 50% of a family’s income is derived for non-timber forest products. However, the government still claims ownership of 99.9% of forested land, with inadequate recognition of customary tenure rights. This leaves these forest dependent communities vulnerable to land expropriation.22

Following post-war development through state-owned forestry companies, the government has gazetted three types of forests to manage these resources: production forests, conservation forests, and protection forests.23 Each category of forest may be established at either the national, provincial, district, or village level of government; however, nationally declared forest areas are most prominent. Conservation forests were initiated in 1993 as National Biodiversity Conservation Areas to be preserved for biodiversity. They now form a network of National Protected Areas (NPAs) that cover 14% of the total area of the country.24 Production forests were developed in response to high rates of deforestation to formalize and regulate the management of logging and were intended to improve sustainability, with a focus on the regeneration of secondary forests to prevent resource depletion. Protection forests were established around the time the Forestry Law (2007) was promulgated and are focused on protecting important watersheds and national security. The National Assembly recently proposed that the application of these forest categories should be reviewed to more accurately reflect actual forest use and enable improved governance of community forests as well as private sector involvement in forest management.25

At the village level, there are a number of mechanisms for land titling, either collective land (land belonging to an association) or communal land (land belonging to an ethnic group). The Property Law (1990) and the Land Law (2003), as well as other government directives, have enabled the establishment of village agricultural and forestry zones for specific uses. These zones use the same production, conservation, and protection forest categorizations as national forest areas.26 While they do not provide ownership of forest resources to villagers, they do enable a degree of tenure security by allocating forests to a specific use category where sustainable practices can be established.27

Laos is currently in the process of implementing significant policy changes regarding the use and management of forests. Perhaps most significantly, the Forestry Law is currently under revision and is expected to go before the National Assembly in 2019.28 As mentioned above, there is an effort to reform the application of forest management categories to better reflect actual use of forests. In 2016, Prime Minister Thongloun Sisoulith implemented strict measures to prevent illegal logging through the Prime Minister’s “Order on Strengthening Strictness of Timber Harvest Management and Inspection, Timber Transport and Business” to regulate the timber processing industry. For example, the export of unfinished timber products has been prohibited. The order appears to have been effective as log exports have since diminished significantly.29

In 2012, the government has placed a 4-year moratorium on land concessions for rubber and eucalyptus plantations, as well as a partial moratorium on mining, as these types of investments have been shown to result in significant deforestation.30 Despite a halt to the moratorium on industrial tree plantations, the suspension of mining concessions has been extended since 2016.31 Another important policy initiative of the government is the Forestry Sector Strategy 2020 (FS2020) which focuses on sustainable management and development in the forestry sector with the aim to increase forest cover to 70% by 2020.32 Notwithstanding the public skepticism about how realistic this goal is, it does show that the expansion and protection of forested areas is a major aim of the Lao government.

Government initiatives to halt illegal logging, reduce the rate of deforestation, and reforest the country are in line with international forestry projects operating in Laos, such as the UN program to Reduce Emissions from Deforestation and Forest Degradation (REDD+). This program provides economic incentives to entice land users not to engage in deforestation activities. Thus far, REDD+ has been piloted in selected sites with the aim of establishing the system at a national scale.33 As such, the program still faces many challenges, such as the transfer of deforestation activities from areas within the pilot to those outside, and difficulties in addressing deforestation connected to economic land concessions for large infrastructure projects.34

Another key global initiative is the European Union (EU) Forest Law Enforcement, Governance and Trade (FLEGT) program, which aims to establish a system whereby only certified legally harvested and processed timber may be exported to EU countries. In 2015, the Lao government entered negotiations with the EU to negotiate a Voluntary Partnership Agreement (VPA) for FLEGT, as an important first step towards setting up the program.35