From the Millennium Development Goals to SDG 2

The Millennium Development Goals (MDGs) are global development goals which were adopted in 2000, and set to be achieved by 2015, as a guide for development work for governments and development partners. The MDGs include 8 measurable targets, with the aim to eradicate extreme poverty and improve standards of living around the world. The MDGs focus on the development areas of education, gender equality, health, environment and global partnership for development. By the end of the MDGs’ target implementation timeline, the Sustainable Development Goals (SDGs) were developed to build on the successes and address the challenges of MDGs. While MDGs largely focused on social targets, SDGs span all dimensions of sustainable development: economic, social and environmental. SDGs are current universal development goals that can be applied to all countries, regardless of their levels of development, towards sustainable development.3 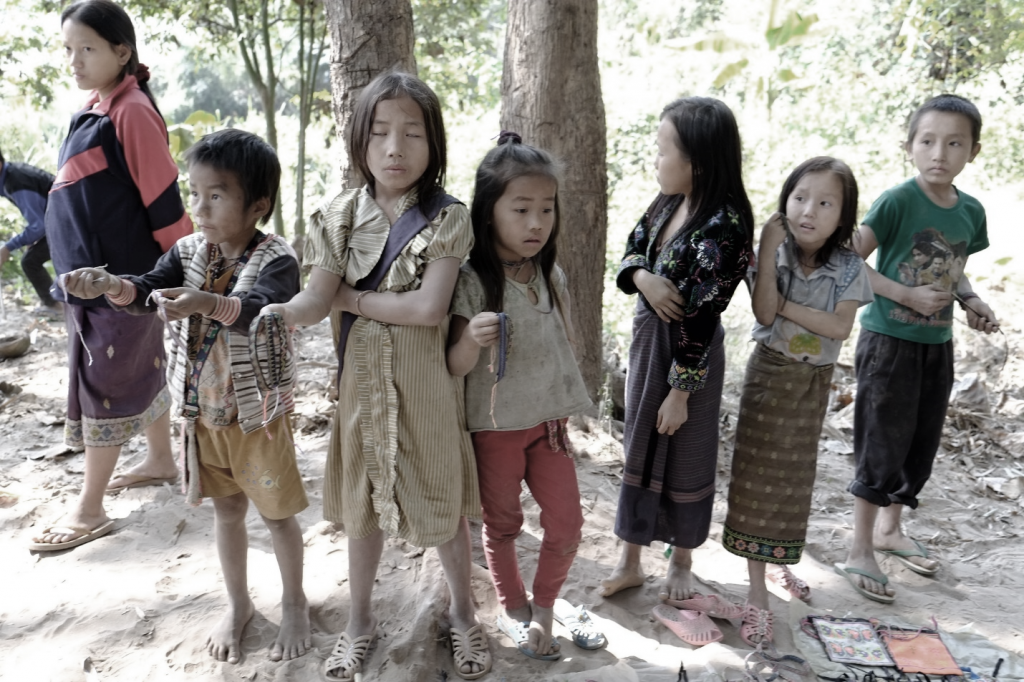 Despite the improvement in food poverty over the last decade, Laos is still classified as ‘serious’ in level of hunger according to 2018 Global Hunger Index. Global Hunger Index (GHI) is a measuring tool to assess hunger at global and national levels, which is determined by four indicators: undernourishment, child wasting, child stunting and child mortality. Higher scores mean more severity in hunger status. In 2018 GHI, Laos ranked 83rd among 119 countries in the list, scoring 25.3, the lowest among its neighboring nations. By comparison, Cambodia ranked at 78th (score of 23.7), Myanmar at 68th (20.1); Vietnam at 64th (16.0), and Thailand at 44th (10.4).6

While many nutrition indicators have improved over the past few years, current figures still present cause for concern. The 2011/2012 Lao Social Indicator Survey reported that 44% of children under 5 (U5) were moderately stunted; 27% were moderately underweight; and 6% were moderately wasted.7 By the second LSIS in 2016/2017, stunting had fallen to 33% of U5 children; underweight children fell to 21%; and wasting increased to 9%. Disparities in these figures based on province and other social factors are considerable. As of the second LSIS, stunting was lowest in Vientiane Capital (13.8%) and highest in Phongsaly province (54%). Children in rural areas without roads, those whose mothers have no education, and those from the poorest quintile are 2-3 times more likely to suffer from stunting than children in urban settings, with high educated mothers, and those from the richest quintile.8

Infant and young child feeding practices in Lao PDR are poor, but have shown progress. Early initiation of breastfeeding (meaning within one hour of birth) stood at 50.1 percent in 2017, while in 2011 (LSIS- I) it was 39 percent. The percentage of children 6-23 months receiving the minimum meal frequency increased from 43% in 2011 to 69% in 2017.The rate of exclusive breastfeeding for infants under the age of 6 months (which is recommended by the World Health Organization for child health) is still low, although it did increase slightly from 40.1% in 2011 to 44.9% in 2017.9

Localization of SDG 2 in Laos

To address the challenges and build on the elimination of hunger across the country, Laos has localized SDG 2 to its own context which can be classified in 4 key outcome areas: (i) sustainable food production, improved agricultural productivity and resilient agricultural practices (relevant to SDG Targets 2.3 & 2.4); (ii) access achieved for all to safe, nutritious and sufficient food all year round (Target 2.1); (iii) Improved nutrition of vulnerable groups (Target 2.2); and (iv) Improved management of genetic diversity (Target 2.5).12

Laos’ localization of SDGs has included incorporating certain SDG targets and indicators into the National Socio-economic Development Plan’s (NSEDP) monitoring and evaluation framework, to support the implementation and monitoring of both targets.13 As for SDG 2, its indicators have been integrated with the goals in the 8th NSEDP 2016-2020, specifically in Outcome 2, Output 2 – Food Security Ensured and Malnutrition Reduced. This target aims to reduce food poverty and malnutrition and sustainably improve livelihoods by enhancing food production performance.14

Implementation of SDG 2 in Laos

Lao PDR committed to combat hunger and undernutrition through joining the UN’s Global Zero Hunger Challenge in May 2015, through which the country committed to ending food insecurity and malnutrition by 2025. Various strategies under the 8th NSEDP also contribute to SDG 2’s implementation. The Agricultural Development Strategy to 2025 and Vision to 2030 aims to ensure national food security through sustainable and climate-resilient agriculture that contributes to national economic growth, industrialization, and modernization. Its overall targets focus on increasing agricultural production, improving competitiveness in terms of quality, enforcing standards and regulations, and guaranteeing food security and safety through compliance with basic SPS (sanitary and phytosanitary) standards. The National Nutrition Strategy to 2025 and Plan of Action 2016-2020 emphasizes a multi-sectoral response to undernutrition, with specific interventions that converge on high-risk areas. The Government also aims to scale up the “First 1,000 Days” approach (from pre-conception to two years of age) with behavior change interventions.15

Along with efforts by the government, development partners have also contributed to the improvement of agriculture and nutrition in the country. One example is the School Meal Programme, supported by the US Department of Agriculture and World Food Programme, which contributed a total of US$47 million from 2008 to 2017. The project provided mid-morning snacks and lunches for 150,000 children in 1,500 schools across the country, especially for those vulnerable, aiming to reduce hunger and improve literacy and primary education.16 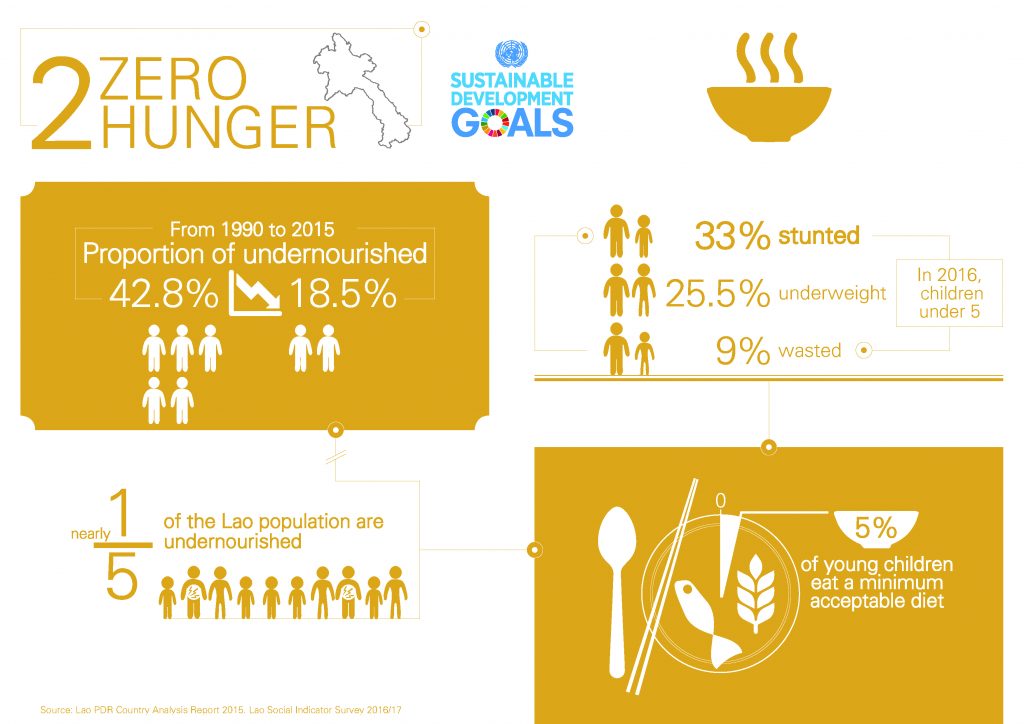 Monitoring of SDG 2 in Laos

SDG 2 targets on nutrition (2.1 & 2.2) can be monitored from food balance sheets and food consumed by the Food and Agricultural Organization of the United Nations (FAO) for three-year periods. Targets can also be measured using the five-yearly Lao Household Expenditure and Consumption Surveys (LECS) that determines the percentage of population under the Food Poverty Line, that is, those consuming less than the minimum dietary energy requirements of 2,100 kcal/person/day. LECS also measures the prevalence of moderate or severe food insecurity in the population in Lao PDR, based on the Food Insecurity Experience Scale (FIES). In addition, there is a five-yearly Lao Social Indicator Survey (LSIS), a nationally representative sample survey which measures the country’s progress on social development. For agricultural and policy framework targets (Target 2.3-2.5 and 2.A-2.C), corresponding indicators are inadequate. Development of surveys and/or censuses to incorporate measures of agricultural productivity and distribution is still required.18 19

To strengthen the monitoring and reviewing of SDGs implementation, Lao PDR developed its first Voluntary National Review (VNR) in 2018, in consultation with ministries, government agencies and local authorities, as well as development partners, civil society organizations and private sector. The report was presented at the UN High-Level Political Forum (HLPF) 2018, highlighting the successes, challenge and future strategies towards achieving the goals and the 2030 Agenda for Sustainable Development.20

In addition to the VNR in 2018, Lao PDR also conducted a mid-term review of the implementation of the 8th NSEDP (and its localized SDGs) in a Roundtable Meeting 2018, which focused on reviewing the key outcomes of NSEDP (sustained inclusive economic growth; social and human development; and environment and disaster preparedness) along with other cross-cutting issues on rule of law and law enforcement.21 22