Background on human trafficking in Laos

Lao PDR is primarily a source, but also transit and destination country for trafficked women, children, and men.3 The main drivers of trafficking include income inequality, increased economic development and a lack of resources to control border areas. Additionally, poverty and a lack of educational opportunity are prevalent in Laos, leading more girls and women out of the country where they commonly fall into commercial sex labor.

While the demography of trafficking victims is diverse, they are mostly rural migrants, specifically from the Lao Tai ethnic group and lowland Lao regions.4 Trafficking victims are often migrants seeking better opportunities outside of the country who experience labor or sexual exploitation.5 As for the instigators, they include tourists, travelers, migrant workers, and businessmen and women visiting for conferences and miscellaneous events.6

Many of the victims are taken to Thailand, Malaysia or China, with approximately 90 percent of Lao trafficking victims going to Thailand.7

Trafficking cases normally involve children and young people who are either exploited in the commercial sex industry or forced into factory, agricultural or construction labor (child labor).8 A small proportion of Lao women and girls are sold as brides in China, seen through a rise in Chinese men registering marriages with Lao women.9 Lao men and boys are often victims of forced labor on agricultural and rubber plantations.10 Many are often relocated to these locations through local Lao middlemen. Vehicle drivers also play a role in occasionally intercepting migrants who are returning to Laos and pulling them back into the countries they were fleeing from. Because of the wide range of actors who are involved in human trafficking, resolving the issues that come with the crime is extremely challenging. 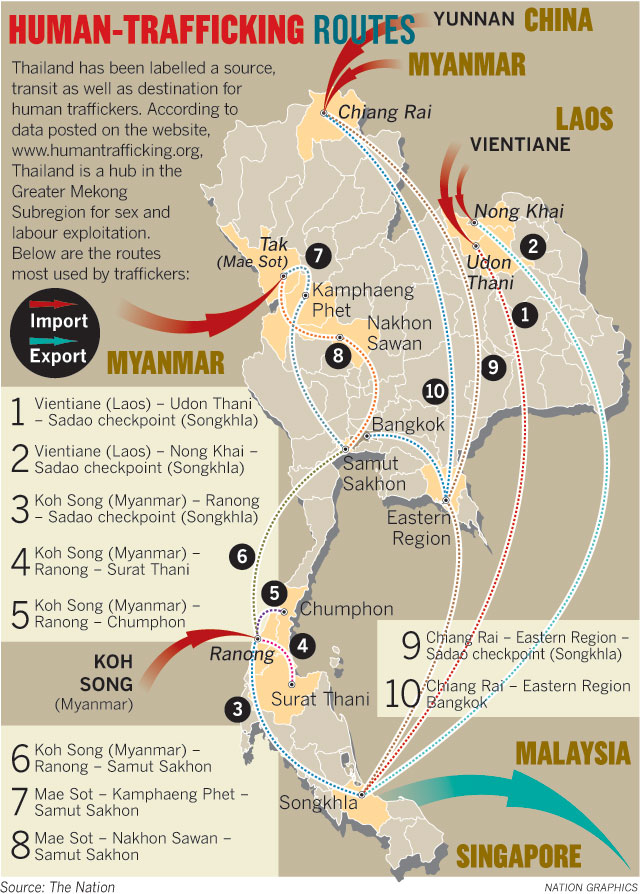 Trafficking routes in Thailand, with routes #1 and #2 coming from Vientiane. Visualization by Ezekiel Rain Inc.

The Global Slavery Index is a report of modern slavery conditions by country produced by the Walk Free Foundation. The 2018 Global Slavery Index found that Laos ranks 22nd out of 167 countries (where the country in 1st position has the highest proportion of the population in slavery).11 This measure was determined by factors like vulnerability and government response, along with the number of individuals living in slavery. An estimated 62,000 people are living in modern slavery in Lao PDR. Laos’ 22nd position in the index is better than some of its neighbours, however – Cambodia is in 9th place and Myanmar 18th. Thailand ranks close to Lao PDR, in 23rd place.12

The national government has taken action on human trafficking within the country through several pieces of legislation. The 2006 Law on the Protection of the Rights and Interests of Children provides protection and assistance from exploitation.13  The national Penal Code also prohibits human trafficking and authorizes penalties ranging from five years’ to life imprisonment through Article 134.14 The 2004 Law on the Development and Protection of Women includes bylaws on the obligations of society, rights of victims and prevention of trafficking of women and children.15 In 2012, the Prime Minister approved a national plan of action.16 However, for these legal initiatives, implementation and enforcement have been weak or nonexistent.

Lao PDR has also created a National Steering Committee on Human Trafficking (NSC), an inter-agency body under the Ministry of Public Security (MoPS).17 Regionally, it participates in the Association of Southeast Asian Nations (ASEAN) and the Coordinated Mekong Ministerial Initiative Against Trafficking (COMMIT). The country is involved in international instruments on human trafficking as well, including the UN Convention on the Rights of the Child (UNCRC), the Trafficking in Persons Protocol (TIPP), and the UN Convention on Transnational Organized Crime (UNTOC).18

Much of Lao PDR assistance to victims depends on aid from NGOs and international organizations such as Sengsavang and the International Organization for Migration.19 These institutions provide services such as financial support for repatriation and family tracing for returnees. For example, Sengsavang provides vocational training like cooking and growing vegetables so that victims can successfully reintegrate into their communities.20 When Lao trafficking victims are repatriated from Thailand to Laos, they go through the Transit Centre which is managed by the Ministry of Labor and Social Welfare in Vientiane.21 Returnees spend roughly one week in the Centre as social welfare workers assist in finding the returnees’ families.22 In terms of post-arrival assistance, there are four shelters in the country that provide assistance to trafficking victims. 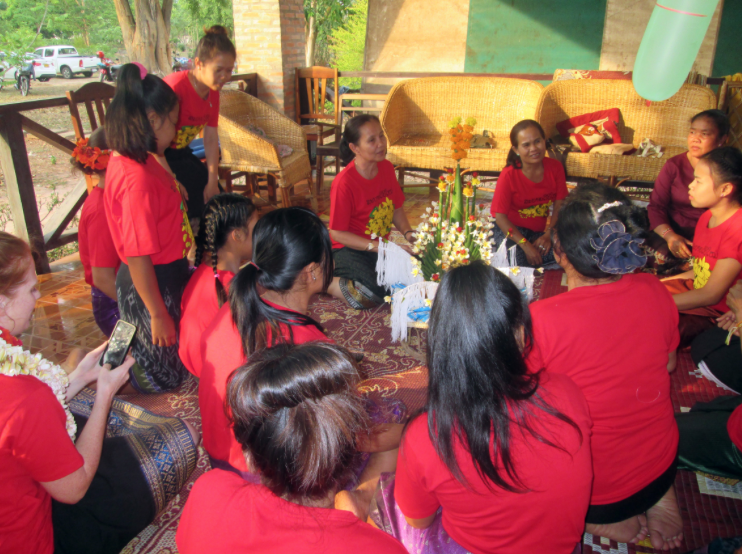 Lao trafficking victims participating in one of Sengsavang’s rehabilitation programs. Photo by Sengsavang

The social impacts of human trafficking are wide-ranging, affecting the economy, social dynamics and labor force. Negative physical and psychological effects of trafficking can make it more difficult for victims to find and keep good jobs. Not only this, a lack of legal work experience prevents victims from having a competitive resume or references to achieve high-quality employment.

The U.S. Department of State annually publishes a Trafficking in Persons Report, the world’s “most comprehensive resource of governmental anti-trafficking efforts.” The 2018 edition reported that “The Government of Laos does not fully meet the minimum standards for the elimination of trafficking and did not demonstrate overall increasing efforts to do so compared to the previous reporting period.”23 The report states that although Laos technically meets the criteria for Tier 2 Watch List, because it has been on this list for four years in a row it cannot remain there. It was therefore downgraded to Tier 3, the poorest ranking, which it shares with Myanmar. The other three Lower Mekong states are all Tier 2. Lao PDR’s rating has fallen in steps from the Tier 2 ranking it held in 2013. (The tier ranking system is based on the extent of a government’s efforts towards the elimination of human trafficking, not on the size of a country’s trafficking problem.)

Despite the lack of significant efforts by the government, the report notes that it did take some steps to address trafficking. It investigated and prosecuted “a modest number of traffickers”, assisted some returned victims and and carried out awareness-raising activities in communities at elevated risk of forced labor in relation to large-scale infrastructure projects.

The 2018 report made the following recommendations:24

By following through on these recommendations, Laos PDR can come closer to reducing the trafficking that takes place and increasing transparency, support and accountability for trafficking victims.