A country’s success largely depends on how well it employs its workforce and develops the knowledge and skills of its citizens. The World Economic Forum’s Global Human Capital Report measures the quantifiable elements of how well a country is developing this ‘human capital’. The report can be used to assess progress within a country, and to compare progress between countries.

The 2017 Global Human Capital Report ranked Lao PDR at 84th out of 130 countries (where 1 is the best position).1 This is well below average, but an improvement from its ranking of 106th in 2016. Laos ranks highly (12th) for deployment, which reflects its high labor force participation rate and low unemployment. It ranks poorly, however, for development (97th), capacity (99th) and know-how (105th).

The human capital of Lao PDR is relatively low. The literacy and numeracy rates are the lowest in Southeast Asia. This has put the country under the shortage of skilled workforce. In addition, the labor force of Laos is small in size. The population aged between 15-64 is 4.2 million, and is projected to reach only 7 million in 2050. All of these factors bring challenges in terms of labor productivity and size for the country. 2

Approximately 70 percent of workers in Lao PDR are in the agriculture and fishery sector. Since the agriculture sector has low productivity, this high percentage has negative implications for decent work and poverty reduction.3 Emerging sectors include health, tourism, education and extractive industries such as mining.4

Unemployment in Lao PDR is low, at 2 percent for both males and females in 2015.5 Unemployment rates are higher for younger people aged 15–24, especially among new graduates and in rural areas.6  Poor people cannot afford to remain without work, while urban and more affluent groups can be more selective about the quality of the work they do.7

Even though unemployment rates are generally low, the proportion of those in vulnerable employment remains high. This is driven by the numbers who work in the agriculture and fishery sector, sales workers and those in very basic occupations. A factor like seasonal employment could be further investigated, considering the fact that high proportions of employees are in agriculture and rural areas (informal workers).8

While the country’s employment-to-population ratio has decreased, it still remains among the highest in the region (77.7 percent in 2010).9 The unemployment rate is predicted to decline to 1.7 percent in 2020, but Lao PDR still faces a major issue – there are fewer skilled workers than the country needs and more unskilled workers than the market demands.10

Globally, according to the International Labour Organization, approximately 5,000 people die from workplace accidents and occupational diseases each day. In Laos, workplace hazards have led to numerous accidents, the spread of diseases, hearing loss, stress-related disorders and even death.11

Although the law provides for safe working conditions and higher compensation for dangerous work, it does not directly protect a worker’s right to remove him or herself from a high-risk situation. Injuries and deaths on the job require employers to compensate the worker and/or the worker’s family. Employers are also responsible for workers who become disabled while at work.12

Social security coverage is fairly limited for workers, with only workers employed in the formal Lao economy benefiting from coverage. Workers in the informal economy do not get basic coverage.13

The Department of Labor Management in the Ministry of Labor and Social Welfare is responsible for workplace inspections. Penalties for noncompliance include fines, suspension of business licenses, ‘re-education’ and warnings.14 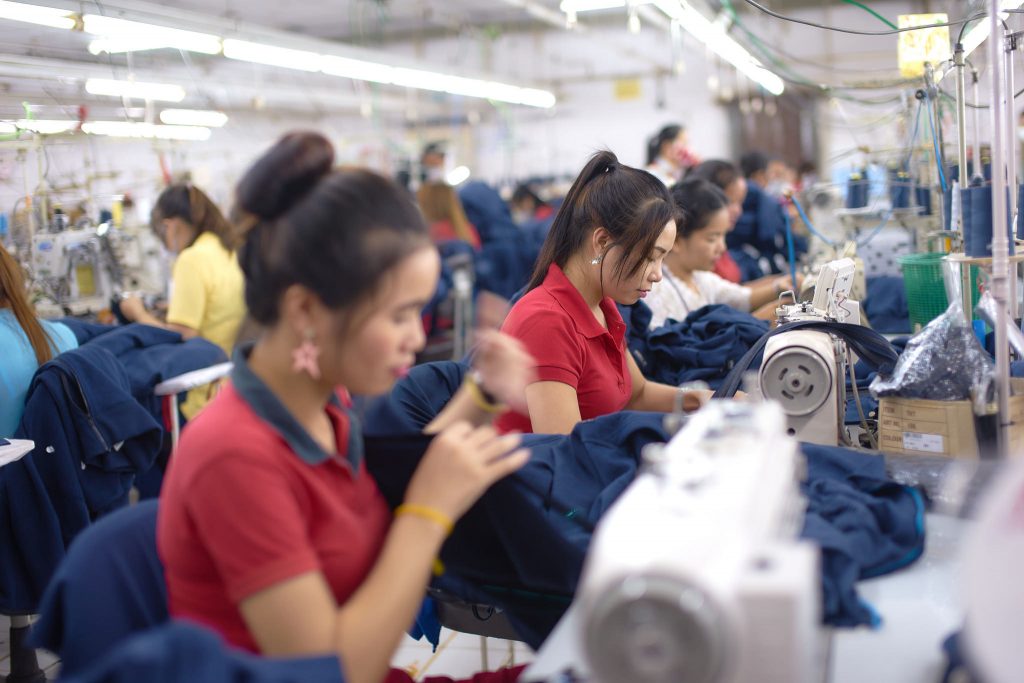 Lao PDR operates under the 2013 Labor Law, which was formally approved on January 2014, replacing the Labor Law from 2006.15 The revised law extends its coverage to both local and foreign laborers in Laos. It also includes policies for overtime and shift work, by prescribing the maximum working hours and appropriate compensation. Termination of contracts is also articulated in terms of resigning grounds and severance payments. Besides these provisions, health and safety procedures are outlined for every workplace.16

As for freedom of association and the right to collective bargaining, the law provides citizens with the right to strike and form unions of their choice. In addition, employers are not allowed to fire employees who are either representatives or heads of trade unions.17

The monthly minimum wage for all private sector workers is 1,100,000 kip,18 (roughly US$130) along with a meal allowance of 50,000 kip per day (roughly US$5.90). Civil servants and state enterprise employees are compensated a higher amount of 1.4 million kip per month19 (roughly US$165). The minimum wages are government-mandated, meaning that workers cannot be paid less than the set minimum rate. With its minimum wage, Laos falls in the top 49 percent of all countries, with 97 countries that lie above its ranking and have a higher minimum wage.20

In 2015, 17 percent of the population were considered ‘lifetime migrants’ in Lao PDR. The proportion of lifetime internal migrants, whose current districts of residence are different from their registered birthplaces, is 23–25 percent among adult males and 21–22 percent among females.21 As a result, internal labor migration is fairly common in the country. Female migrants are generally involved in domestic work, the garment sector, bar work or the sex trade.22 As most internal migrant workers work in informal settings, they are not registered or eligible to receive social security and workplace protection.

Family members working overseas provide a large source of income for families living in southern Laos. In 2013, remittances sent back home by Lao migrants accounted for 2.5 percent of the country’s GDP.23 Lao migrants abroad make up 8 percent of the Lao working population. They are a vulnerable group, mostly working in low-paid and labor-intensive positions in neighboring Thailand.24

Lao PDR is primarily a source, but also transit and destination country for trafficked women, children, and men.25 The main drivers of trafficking in Laos include income inequality, a lack of resources to control border areas, and increased economic development. Since poverty and lack of educational opportunity are prevalent in Laos, many girls and women are led out of the country and fall into commercial sex labor. The 2018 Global Slavery Index ranked Laos 22nd out of 167 countries (where 1 is the worst-ranked country).26